How Big Is The Brain's Penis Area? 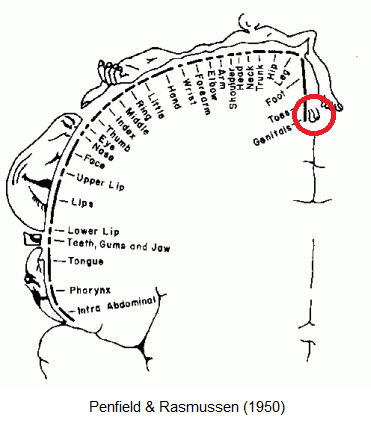 Rolf Degen has an interesting post on the question of how much of the brain is devoted to processing touch stimuli from the penis.

The Fake Homunculus: A new book about sex depicts a beefed-up representation of the penis in the human brain Everybody has once already seen a picture of the Sensory Homunculus - a humanized image of the relative amount of cerebral cortex space devoted to processing the tactile input from the different body parts. It appears grotesquely disfigured, because some parts like the lips or the hands commandeer disproportionately much cortical capacity.

But, Degen says, a new book claims that bashful scientists suppressed the truth about the enormity of the penis area of the cortex.

In her book Sex, drugs, and rock 'n' roll, British science writer Zoe Cormier tells the tale of how "imaginative scientists in the 1950s produced a spectacularly ugly model of the human body that illustrates the relative importance of anatomical regions as reflected by the size of the somatosensory cortex devoted to each." But according to her narrative, the creators appear to have taken fright at their own courage: They deliberately downsized the depiction of the male member. "The size of the somatosensory cortex devoted to the penis is gigantic, but researchers in the 1950s did not reflect this in their illustration."

According to Degen, Cormier says that a new, well-endowed homunculus has now been proposed, and that it's more accurate than the old one. She cites a Journal of Neuroscience paper, Degen says, but that paper is about the location, not the size, of the penis zone.

So where does he big dick in her book come from? After some Googling, I may have found the primary source. It is a blog post about the representation of the penis in the brain [...] But look what the author says about this picture: "I find it kind of funny how we put so much focus and attention on the penis and genitals [...] one would probably expect the homunculus to be more like this..."

In other words, the blogger posted the well-hung homunculus as a joke, not a scientific claim. Degen goes on to say that the somatosensory cortex, which is where the homunculus resides, just isn't responsible for the emotional or pleasurable qualities of touch. In fact, it's about tactile acuity. The spatial resolution of touch is better in areas with more cortex devoted to them, but this has nothing to do with whether the touch feels good or not. I would say however that we shouldn't be too hard on Cormier, because her assumption - that, in the brain, bigger means better - is widespread, even among neuroscientists. For instance, a lot of research is about differences in the volume of different brain areas between groups of people (e.g. patients with some disease vs. controls.) In interpreting the results of these studies, it's common for researchers to treat decreased size as a sign of impaired function. And in functional imaging, bigger brain activity is often glossed as "increased processing" while reduced activity is seen as a deficient response. Yet there are plenty of counter-examples where smaller is better.