How a Creationist Thinks About Cancer 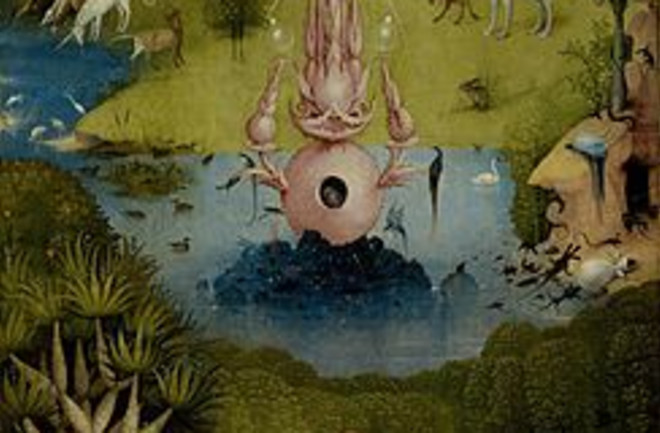 The Garden of Eden. A detail from Hieronymus Bosch's "The Garden of Earthly Delights." Wikimedia Commons. In my previous post, on the inevitability of cancer in a world dominated by entropy, I described how the cells in a body are constantly dividing, copying with each division every letter and punctuation mark of their genetic information. “Only a creationist could believe that errors do not happen along the way,” I wrote. Mistakes that slip through the cell’s elaborate proofreading mechanism accumulate, and in the right combination these changes -- mutations -- can lead to cancer. Something seemed a little fishy to me about the first part of that sentence, and a reader pointed out my mistake. Though creationists do not believe in evolution, they do believe in genetic mutations. While they play no part in the origin and development of the species -- these were laid out in advance by God -- mutations can give you cancer. They are among the wages of sin befalling mankind since Eve bit the apple in the Garden of Eden. Here is how David Demick, a pathologist in Nebraska, put it in an article on the Institution for Creation Research website:

the tragedy of cancer is the result of ongoing genetic deterioration in our body cells, and as such is a manifestation of the Edenic curse of decay and death.

Creationists -- and fundamentalist Christians in general -- pick and choose among the science that is consistent with their beliefs. And while they reject evolution and the Big Bang theory, they embrace the Second Law of Thermodynamics, which holds that the entropy of the universe is constantly increasing. There can be temporary pockets of order -- life, civilization -- but in the long run order gradually gives way to disorder. For a creationist the equations of thermodynamics are a mathematical description of the fall from grace that began with original sin. I’ve been trying to track down a quote from Garrison Keillor that went something like this: “To a fundamentalist there is no such thing as progress.” It’s all been downhill since Genesis, and the decay won’t stop until the Second Coming. Related post:The Most Powerful Carcinogen Is Entropy