A curious flurry of headlines in praise of beer appeared this week:

It was reported that scientists from Germany have discovered that a molecule in beer called hordenine activates dopamine receptors in the brain, and thus produces a positive mood. The research in question was published back in March of this year, so I'm not sure why it only made the headlines this week - maybe Oktoberfest had something to do with it. Either way, the study did indeed find that hordenine is a dopamine D2 receptor agonist, but it's not clear this has any relevance to beer drinkers. 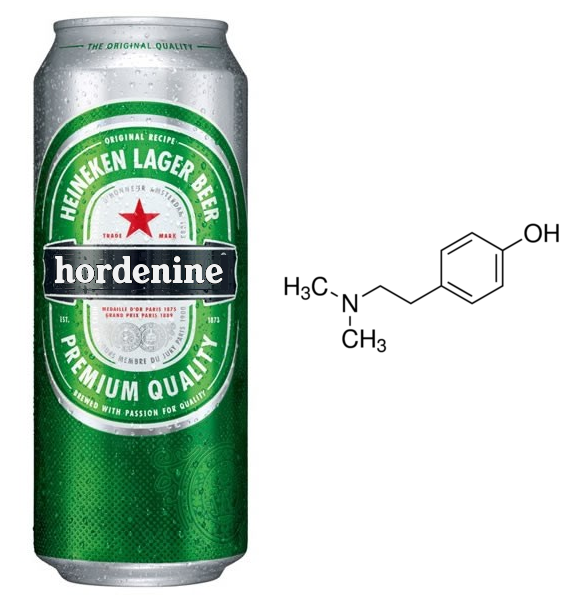 The German researchers, Sommer et al., are chemists, not neuroscientists. They used computational simulations to model whether 13,000 known 'food-derived' molecules would bind to the D2 receptor. The hordenine molecule was predicted to fit the receptor, and follow-up experiments showed that it does indeed bind to it, suggesting possible psychoactive properties. But Sommer et al. didn't study whether hordenine actually exists in beer in sufficient amounts to have any effect. They didn't consider whether it can even reach the brain after oral consumption. According to Wikipedia, some animal studies have shown that hordenine is "not orally active", although it does have effects when injected. Overall, Sommer et al. were engaging in pure speculation when they wrote that

Based on its presence in beer, we suggest that hordenine significantly contributes to mood-elevating effects of beer.

So I'm pretty sure that there is only one molecule in beer that makes you happy. This is the same molecule that can make you unhappy. So let's raise a glass to ethanol, the real star of beer.