Hairshirted Eye for the Irritable Guy: New Study Shows How the Feel of Things Affects Thought 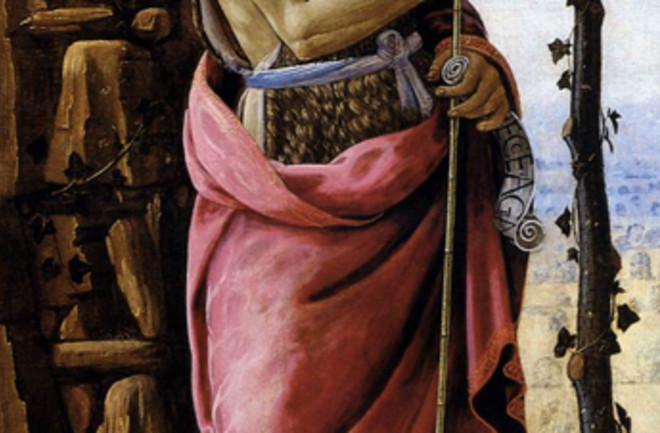 Athanasius (b. 293) was an ascetic known not only for his piety but—like many ascetics-- for his penchant for wearing hairshirts (these were also available as underwear for the truly hard core). Hairshirts are made from goats’ hair, and they are as itchy as they sound, although the true test of your fealty to God was to wear one that was flea infested. Thanks to a new study on the cognitive effects of the feel of everyday objects, we now have some science to help us understand what effect wearing a hairshirt had on the way Athanasius thought. Ackerman, Nocera, and Bargh have discovered that people are more likely to judge an ambiguous passage as difficult and harsh after they have completed a jigsaw-puzzle covered in rough sandpaper, compared to folks who read the same passage after completing the same puzzle that was smooth to the touch. They also explored a few other examples of bleed-through from the way things feel to the way we think. Participants evaluating resumes judged ones that were on heavier clipboards to be better than ones on light clipboards. Sitting on hard chairs versus soft cushioned chairs caused negotiations to be more rigid in character, with less flexibility in a negotiation task. These are remarkable effects with many potential implications, and applications (next time you’re trying to sell something, make sure you’re seated in a hard chair, and your buyer is in soft chair, for example; and clothes designers have a whole new dimension to consider). What is their underlying basis? The researchers hypothesize that our experiences with touch early in our development provides a scaffold for the development of conceptual knowledge. In adult life, these same touch experiences activate the scaffold in the same way, and lead to unconscious influences on our attitudes and decision making. The experience of weight gets metaphorically associated with seriousness and importance. Idioms like “that’s heavy” reflect this association. Similarly, rough textures get associated with difficulty, and we say “having a rough day.” This research is another example of how the way we think is all wrapped up in the way we body. The new results add to our growing understanding of the ways in which embodiment and thought are more intertwined than was previously believed. The ways in which cognition is embodied was also the topic of a recent volume in the Cambridge Handbook series, called “The Cambridge Handbook of Situated Cognition”, which I had the pleasure of writing a chapter for.

Research into the ways in which cognition is intertwined with bodily experiences raise interesting issues regarding common science fiction fables and science fact predictions. Many of these hinge on being able to dispense with the body. The body, in this view, is just a convenient output device, easily replaced with another, or not replaced at all so as to be a disembodied intelligence like Hal of 2001. Our body is the computer, and who we are is the software, so if the hardware falls short we can just get new hardware. But what if who we are is this particular software running on this particular kind of hardware? The Cylons of Battlestar Galactica are an interesting mix of these ideas. They never died: as soon as their current body was eliminated, their consciousness was uploaded to another body. But they were not into body swapping: you got uploaded to the same body model, or not at all (aka, death), potentially compatible with embodiment ideas. St. John the Baptist wearing a hairshirt, by Jacopo del Sellaio, 1485.Number Six of Battlestar Galactica, a Cylon.