Most physics fans out there have probably heard of Kip Thorne, author of Black Holes and Time Warps and some other books. If you polled physicists to find out who they thought had been the most influential American scientist doing research in general relativity over the past several decades, Thorne would win hands-down. (Here’s a recent interview in Discover.)

And if you dropped the delimiter “American” from the question above, the winner would undoubtedly be Stephen Hawking. So we’re very happy to have a guest post from Kip, announcing an upcoming talk by Hawking. 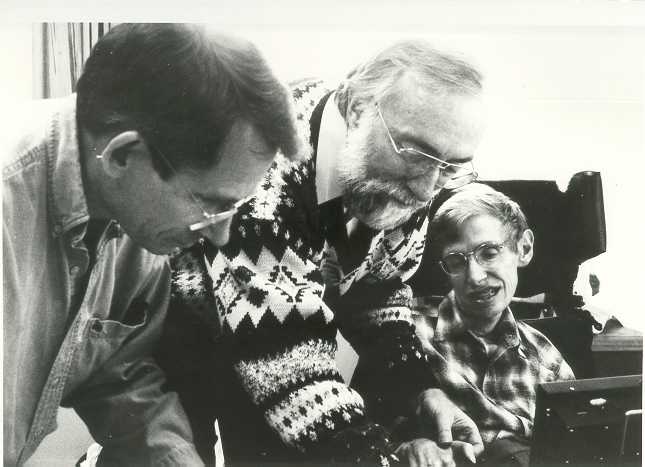 Stephen Hawking is coming to town – to Pasadena, that is.

Caltech, in Pasadena, California, is Hawking’s home away from home. Since 1991 he has spent roughly a month a year here as our Sherman Fairchild Distinguished Scholar. This year he flies in from his English home at the end of February, then heads off to Texas in early April.

He arrives with an entourage of five care givers to tend to his physical needs, one or two family members, several graduate students, and a “graduate assistant” who handles logistics and serves as general fixit-person for his computer system and mechanized wheel chair. His current chair is new and sophisticated. At the flick of a switch, its hydraulics can lift him up to a standing person’s eye level or slide him down near ground level for high-speed chases — he has been known to take pleasure from running over the toes of university presidents.

Hawking’s Pasadena sojourns are rather like Einstein’s in the 1930s. Caltech is an intellectual magnet – a crossroad for ideas about the cosmos and the fundamental laws of nature, which are Hawking’s passion. He contributes mightily to the ferment, and partakes. Our California night life (LA, not Caltech!) is also pretty good; and Hawking, like Einstein, is a party animal, only more so. During his annual month here, my own social life intensifies five-fold just from being his closest California friend. He loves opera, theater, jazz clubs, barbecues that he hosts in the patio of his Pasadena home, and dinners with fine wine – especially an Indian Feast prepared for him by Caltech undergraduates. Yes, we geeks can cook up a storm – well, not me, but the younger generation.

Conversation with Stephen is slow, about 3 words a minute, produced by Stephen moving a muscle in his face (imaged by a lens and photodetector) to control a cursor on his computer screen. It’s slow, but rewarding. You never know, until his sentence is complete, whether it will be a pearl of wisdom or an off-the-wall joke. Faster speeds are on the horizon: computer control via brane waves, without drilling a hole in his head (he’s opposed to that). But he resists changing technology, even without drilling, until forced to. “I can’t believe it’s as good as what I have.” (It actually is; my wife has a friend with ALS who proves it so.)

Most of Hawking’s Pasadena time is spent thinking, conversing, and working on projects. Jim Hartle drives down from Santa Barbara to continue their decades-long research collaboration on the birth of the Universe. Leonard Mlodinow, a Pasadena-based free-lance writer, toils with him on a book: in the past, A Briefer History of Time; now, their forthcoming The Grand Design. And there are drives to Hollywood to film for Star Trek or the Simpsons or the forthcoming Stephen Hawking’s Beyond the Horizon.

On each Pasadena visit, Hawking gives a lecture for the general public – always before in Caltech’s limited-seating Beckman Auditorium, but this year in the newly renovated Pasadena Convention Center, at 8PM, Monday March 9. “Why We [the human race] Should Go into Space” is his title. It’s an opportunity to see him in action, be immersed in his mind’s world, and – if last year’s lecture is any indication – participate in a happening. Tickets are available from the Caltech ticket office, (626) 395-4652, at $10 each.

The last time I saw Hawking speak to such a large audience, thousands, was in a converted railway station in Santiago Chile, soon after General Pinochet’s regime gave way to civilian rule. It was quite a show. Hawking made a grand entrance to rock music and charmed the crowd. The President of Chile and other civilian officials sat on one side of the giant stage, the military brass on the other, with enormous tension between them; they were hardly speaking to each other in those days. Only Hawking could bring them into the same room. His aura works magic. The next day the military flew us to Antarctica: a C130 cargo plane filled with TV cameras, journalists and physicists. It was August, the Antarctic winter, the first flight to Antarctica in more than a month due to winter storms. It was a Hawking Adventure, one among many. He lives life to the fullest. He will fly on a rocket into space soon.