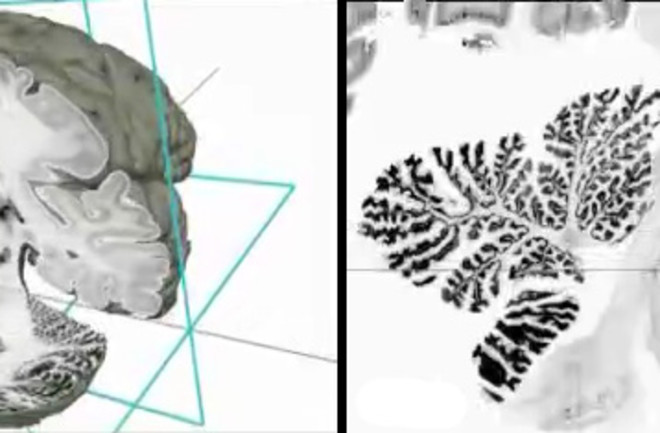 Researchers have for the first time built a 3D model of a human brain showing structural detail down to the cellular level. This ultra high-resolution atlas, dubbed “BigBrain,” aims to show the architecture of the brain at various levels — from the cortex’s layers and columns to its microcircuits and cells.

Researchers use a special tool called a microtome to cut sections from a brain preserved in paraffin wax. (Courtesy of Amunts, Zilles, Evans et al.)

A team of researchers from Germany and Canada began with the donated brain of a 65-year-old woman and embedded it in paraffin. They made more than 7,400 slices of the brain using a specialized slicer called a microtome. Each slice was just 20 microns thick —smaller than one strand of human hair. They then mounted the slices on slides and stained them so cellular structures were visible.

The slides were then digitized with a high-resolution scanner and reconstructed into a 3D brain atlas. Results are published in today’s issue of the journal Science, and the tool is freely available to scientists.

The project, which took 1,000 uninterrupted hours just to collect the data, “has been a tour-de-force to assemble images of over 7,400 individual histological sections, each with its own distortions, rips and tears, into a coherent 3-D volume,” says senior author Alan Evans of the Montreal Neurological institute at McGill University.

It took time to rectify those distortions between one section and a neighboring section and make sure each was aligned. Some of the differences were as much 1 to 2 centimeters, according to lead author Katrin Amunts of the Research Centre Jülich in Germany.

Brains have been mapped since the early 1900s, beginning with simplified drawings that were based on what scientists could see and analyze of the cellular structures, Amunts says. Though recent advances in neuroscience have resulted in a number of such reference brains, no currently available atlas probes further than the macroscopic, or visible, level. This new high-resolution brain atlas, by contrast, captures connections at the cellular level — 50 times more detailed than anything available today.

The reference map vaults anatomical analysis forward and could help researchers with modeling and simulation. For example, the 3D model allows scientists to analyze cortical thickness in the brain, and that can be used to examine changes in the brain over a lifetime, particularly in brains of those with degenerative disorders.

“Fine-grained anatomical resolution is a prerequisite to fully understand the interplay between architecture and brain structure, on one hand, and cognition, language, emotion and other processes on the other hand,” Amunts says.

The project is part of the European Human Brain Project, one of several mapping initiatives around the world.