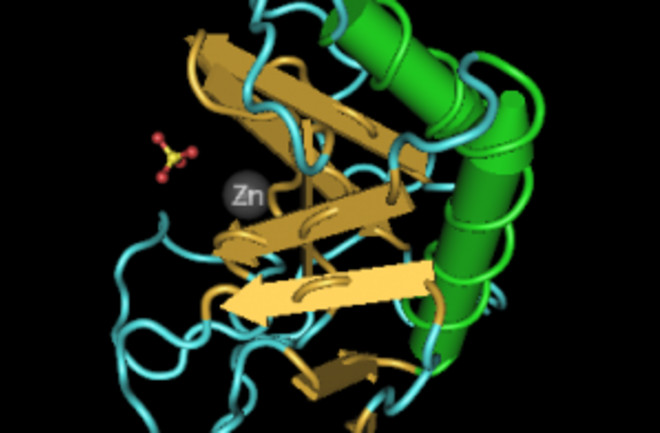 The protein produced by the sonic hedgehog gene. Wikimedia Commons. I was listening this morning to Joe Palca’s sad, beautiful story on NPR's Morning Edition about medulloblastoma, the most common childhood brain cancer. Among adults the cancer hardly every occurs — its prevalence is about 8 cases for every 10 million people. In children there are 5 cases per 100,000. One of them is a 12-year-old boy named Carver, who is being treated at Seattle Children’s Hospital. Carver’s brain tumor was successfully removed by surgery but not without side effects. “Carver's short-term memory is a mess,” Palca reported, “ and he has difficulty walking. His eyes haven't been pointing straight since his tumor was removed. That'll take more surgery to fix. None of these problems was caused by Carver's cancer.” They're the result of the treatment. Palca was quick to add that the doctors aren't considered to be at fault. Removing the tumor involves all the risks of open brain surgery, and “once they find the tumor, they want to remove all of it.” No matter how steady the surgeon's hand, good tissue will be destroyed along with bad. The story goes on to describe a technology that might improve the odds: tumor paint. It is made from scorpion venom, which can be modified so that, injected harmlessly into the bloodstream, it accumulates inside cancerous cells. Attached to each molecule of the drug is a fluorescent dye. Shine a light on the tumor and it glows. "We think that Tumor Paint might allow surgeons eventually to do a keyhole surgery like you would do for fixing a knee or for removing an appendix," Carver’s doctor, Jim Olson, tells Palca. Olson is the inventor of tumor paint and has started a company to develop it. The goal is cleaner, more precise surgeries with less collateral damage. The story, which was aired in two parts (I’ve quoted from both the print version on the NPR website and from the broadcast), reminded me of another boy and another doctor who has been trying to confront medulloblastoma in a very different way. It is not only surgery that can leave a patient tumor-free but brain damaged. To kill any cancer cells that escaped the knife, the operation is often followed by radiation treatments with the destructive rays beamed into the child’s still developing brain. What is needed is a drug that shrinks the tumor while reducing the need for more invasive procedures. In my book, The Cancer Chronicles, I tell about Tom Curran, a researcher now at the University of Pennsylvania medical school, whose search for a better treatment was motivated by his experience years ago at St. Jude Children’s Research Hospital in Memphis.

I met one kid, a teenager, who was more than five years free of his disease. He was about sixteen. He was blond haired, blue eyed. He was joking around with the physician. But he was beginning to realize that the rest of his class was continuing to advance and he was leveling off. He began to see that the rest of life was going to be a terrible struggle for him and his family. Working in the lab doesn’t give you that kind of perspective. I couldn’t get the images out of my head.

While Olson, the doctor in the NPR report, is trying to improve surgical techniques, Curran is working on a way to reverse the effects of a malfunctioning genetic pathway that is involved in about 20 percent of medulloblastoma cases. It is called sonic hedgehog, after the video game character. When it is functioning properly it controls a cascade of molecules, with names like patched and smoothened, that help orchestrate the unfolding of an embryo into a well formed creature. If a mutation causes sonic hedgehog activity to become too muted, the result can be a birth defect called holoprosencephaly, marked in the most extreme cases by a head with a single, cyclopean eye. But if the sonic hedgehog signals are too intense they can lead to a variety of cancers, including medulloblastoma. Curran set out to find a way to rein in hyperactive hedgehog signaling, beating back medulloblastoma and possibly eliminating the need for more damaging treatments. Ultimately Curran settled on a potentially safer drug — a hedgehog inhibitor called vismodegib. There are encouraging signs that he is on the right track. The drug has been approved for treating severe cases of another cancer, basal cell carcinoma, which also arises from aberrant hedgehog signaling, and clinical trials are under way for medulloblastoma. All of this reminds me of one of the most moving books I have ever read: Death Be Not Proud, the journalist John Gunther's devastating and uplifting account of his teen-aged son Johnny, who died from a brain tumor called glioblastoma. While medulloblastoma is the most common pediatric brain tumor, glioblastoma is the most prevalent one in adults. I first read the book in college — or maybe high school — and I have probably reread it three or four times. I've picked it up over the years when some turn of life — a breakup with a girlfriend or more recently a divorce — has left me discouraged. Every time I am absorbed by the story, and every time I end up feeling a little happier and more optimistic. Part of that is the realization that things could be so much worse. But at least some of the effect comes from being reminded of the resilience of the human spirit, even in the face of an impossible situation. Gunther's book was published in 1949. It can be confidently said that if Johnny were diagnosed today, doctors could describe in far more detail what was happening with the molecules in his brain. But they still couldn't say why — glioblastoma has no established cause — or offer hope of more than a few extra months of life. It is easier to be optimistic about medulloblastoma, which has a much higher survival rate. Even with today's crude treatments, some 80 percent of children with the tumor are alive after five years. Maybe tumor paint and vismodegib will improve the odds, and someday children will come home from the hospital with their tumors gone, and their brains as sharp as when they went in. @byGeorgeJohnson Joe Palca's two-part series on NPR: Why Painting Tumors Could Make Brain Surgeons BetterTreating Kid's Cancer With Science and a Pocket Full of HopeThe Cancer Chronicles was picked this week as an Editor's Choice by the New York Times Book Review. It was reviewed there by David Quammen. For a preview, please see the book's website.