Last year, there was quite a bit of excitement over a "Genetic Test To Predict Risk for Autism". The test was revealed in a paper in Molecular Psychiatry, by Australian researchers Skafidas and colleagues. The claim was that a statistical classifier could spot patterns of genetic variation that differed between people with autism and healthy controls - with 70% accuracy. For a good discussion of the paper, including comments from the lead author, see here. However, a

So scrutinize it they do, and they find it wanting:

In short, the frequencies of reported risk and protective alleles do not differ between related individuals with or without autism in independent data sets; instead, they reflect ancestral origin. Specifically, cases have more diverse ancestral origins within Europe than controls. The putative risk alleles are more common in the Northeastern than in the Northwestern Europe, whereas the putative protective alleles reflect the opposite trend.

In other words, the 'autism' genetic variants were indeed more common in the autism cases, compared to controls, but only because the cases and controls were from different places. The classifier worked, but it wasn't detecting autism, it was detecting ancestry. The problem arose because the controls were from the CEU healthy dataset, while the cases were from a different study, the AGRE autism project. "CEU" is Central Utah, where most people are of Northwest European origin (mainly due to Mormon emigration from Britain). AGRE included all kinds of white Americans, i.e. a much more diverse sample, with ancestries from all over Europe. Now Skafidas et al realized this, and tried to get around it by only including individuals who were genetically "CEU-like". However, the critics say that the fix wasn't enough: the autism cases still contained more Northeastern Europeans (e.g. Finnish, Estonian), and this is what the classifier was detecting. This plot shows the problem: the two axes represent geographical variation within European ancestry. 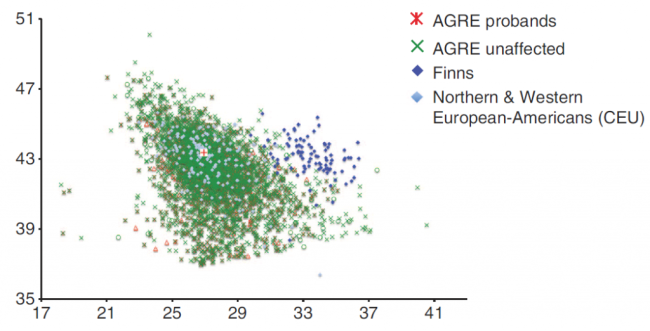 It's a little hard to see, but the red and green AGRE folk have a wider geographical range than the light blue CEU ones, and are closer in some cases to the dark blue Finns (not included in the study). In fact, the classifier gave healthy Finnish genomes a high "autism" score, more evidence that it was geographically biased.