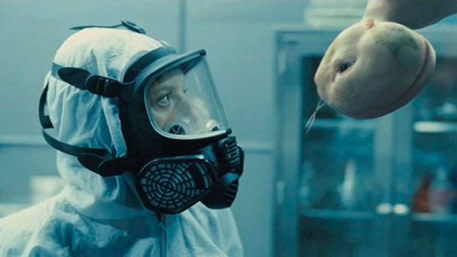 If you had the tools to manipulate DNA and produce new hybrid species in order to obtain potentially life-saving drugs, would you do it? This question lies at the core of “Splice

,” a new science fiction/horror mash-up starring Adrien Brody and Sarah Polley as two young, hotshot biologists who create a human-animal hybrid, with--wait for it--unfortunate consequences. The movie’s title, of course, refers to the technique of “gene splicing,” in which segments of different organisms’ DNA, their genes, are deliberately shunted together and/or moved around to alter their genomes and impart new traits. While not necessarily universally embraced by the public at large, this method has been in use for a while and is therefore not exactly controversial. In real life, for instance, scientists have been inserting human genes in bacteria to produce insulin for years. More recently, researchers have been using mice as models of genetic engineering to study and treat human diseases by isolating and tweaking specific genes. Even combining the DNA from two separate species to generate animal hybrids (see: mule or liger) is almost commonplace. But creating human-animal hybrids… well, that’s a different story entirely, and that is the ethically charged ground that “Splice” uncompromisingly trods on. In short, Clive Nicoli (Adrien Brody) and Elsa Kast (Sarah Polley) decide to take matters into their own hands when their higher ups decide to shutdown their lab’s genetic engineering experiments in order to focus on drug research and development. Angered by the setback and determined to carry their ultimate ambition--producing a viable human-animal hybrid--to fruition, Clive and Nicoli successfully combine human DNA with that of an amphibian and use it to secretly bring “Dren” (nerd backward) to life. From the start, Nicoli is much more wary of the experiment, both for legal and moral reasons, and only reluctantly accedes to Kast’s entreaties after she convinces him that it could lead to the discovery of new, life-saving compounds. His concerns prove well-founded when Dren, whose unstable DNA causes her to grow at an extremely accelerated clip, quickly becomes too much for both of them to handle, and their once close relationship begins to deteriorate as a result. Without giving too much more away, let’s just say that the movie ends on a decidedly sober note after a dramatic climax. Unlike many of the films that deal with the subject, “Splice” adopts a fairly even-handed attitude to genetic engineering, offering up an unflinching look at both the upsides and downsides of its application. Instead of portraying Clive and Elsa as your typical do-no-wrong, gung-ho scientists, director Vincenzo Natali is more nuanced in his approach, presenting them as morally conflicted individuals who, despite having strong convictions, fail to grasp the enormity of their creation. Their feelings of guilt, unease, and frustration, as much as Dren’s development, are what drive the plot forward and create the ethically complex situations that Natali wants the audience to mull over. Even for a science fiction movie, there isn’t actually too much that’s worth quibbling about in how it presents genetic engineering (mostly because it’s fairly light on the science). Speaking as a scientist, what I do take issue with is in Clive’s and Elsa’s ridiculously overwrought hipster-iness. I know this may sound silly, but, having seen and known many researchers and professors, I can honestly say that none of them would ever wear the designer outfits that Clive and Elsa sport. (Clive’s lab coat, which is bedecked with patches aplenty, was particularly jarring.) But I certainly wouldn’t call this annoyance a dealbreaker. Viewers looking for a genuinely terrifying experience a la “Event Horizon” or any number of sci-fi/horror movies will want to look elsewhere. Putting aside a few scenes, there really isn’t much here to scare you - at least in the traditional sense of being “scared.” Not to say that this movie is for everyone. This film will disturb you on a whole other level and force you think long and hard about the implications of genetic engineering taken to its extremes. Of course, the techniques and technologies that are shown in “Splice” are still very far off - and those that could come to pass likely won’t for the very reasons that Clive and Elsa struggle throughout the film. But, with the recent flurry of interest in synthetic biology and artificial life, it is entirely possible that scientists may soon be poised to make significant, and significantly controversial, breakthroughs in this nascent field.