From Lupron to PlayWisely: An Autism Journey

A new treatment for children with autism has an interesting history. Here's the report: Prospective, Blinded Exploratory Evaluation of the PlayWisely Program in Children with Autism Spectrum DisorderPlayWisely is rather like a 'brain training' program of cognitive exercises, but involving a face-to-face interaction with a coach too, which is a big plus (often these things are computerized.) It's all very innocuous. However, the lead author is one Janet K. Kern, who is affiliated with the Maryland "Institute for Chronic Illnesses", home of the not-at-all-innocuous duo who are Mark and David Geier. This father-son team is known for being leading proponents of the idea that autism is caused by mercury in vaccines. Geier the Father recently lost his medical license. As Wikipedia has it:

On April 27, 2011, the Maryland State Board of Physicians suspended Mark Geier's medical license as an "emergency action", saying he "endangers autistic children and exploits their parents by administering to the children a treatment protocol that has a known substantial risk of serious harm..."

This 'treatment' was the Lupron Protocol which involves giving children doses of a powerful drug that reduces levels of the sex hormones, testosterone and estrogen. Lupron is more commonly used for chemical castration, the treatment of cancer, and sex reassignment. Not autism. Geier the Son meanwhile was never a doctor in the first place, but was recently fined $10,000 for practicing medicine as if he were one. To recap, two men were practicing medicine, with one qualification between them, and now they've got none. So Kern's association with these two is hardly a good sign. But it wasn't her first involvement with a dodgy treatment. Kern was also closely involved in the secretin theory. Secretin is a hormone involved in digestion and in 1998 there were claims that it could treat autism. Kern published research on secretin (eg) until about 5 years ago when her focus shifted to mercury. She's coauthored severalpaperswith the Geiers - many of them on mercury, testosterone, or both. So it's surprising that she's now turned to a purely psychological intervention, the PlayWisely program, which is meant to build children's skills by the means of games and puzzles. No Lupron, no mercury; it's quite non-biological. 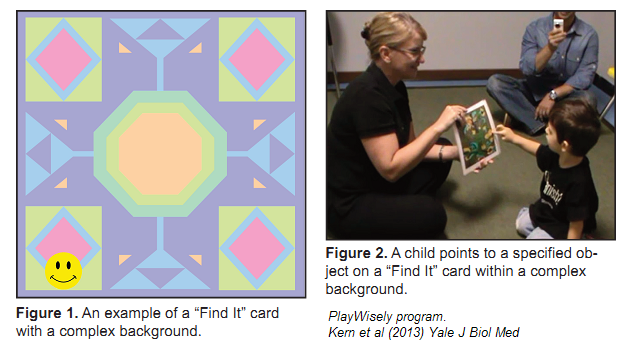 Well, I say 'non-biological'. According to the authors, it's actually all about the brain:

PlayWisely, an interactive program originally developed for neurotypical infants, toddlers, and preschoolers, was designed to stimulate connections between the major brain areas (bringing together touch, sound, visual, and proprioceptive stimuli)... ... through combined progressive perceptual, cognitive, and motor exercises that coordinate sensory and cognitive systems, ultimately targeting the connections that affect a child’s ability to attend, recognize, recall, and react.

This educational neuro-fluff is so commonin education and business that it's hardly worth mentioning, although I would have hoped that the Yale Journal of Biology and Medicine would have objected to it. Did PlayWisely work? Not really. The paper reports on a blinded, randomized controlled trial in which 18 autistic children got PlayWisely and a usual care control condition. Kids improved on their ability to perform the PlayWisely tasks after 3 months of PlayWisely, but it had no effect on autism symptoms. Sadly, the fact that they improved on tasks after practicing on the same or very similar tasks, just shows that these children have memory. The authors say:

The results from this study suggest that PlayWisely may be able to stimulate brain connections in autism because of improvements measured in recognition, brain region agility, phonemic awareness, letter recognition, and early memory skills. Without brain data, it is not clear that connections were strengthened with PlayWisely; however it is a possible explanation.

It's more than a possible explanation: if they learned something, some brain connections were strenghtened. That's what learning is. What we don't know is which connections were changed, but nor do we need to know that; the important thing is what it means for the child's symptoms and behaviour. It didn't seem to help. But it's a lot better than Lupron.