Forget tooth whitening -- eye whitening might be the next big thing!

Did you know that among primates, only humans have prominent whites (sclera) in their eyes? Some have hypothesized that this trait evolved because it makes it easier to tell where someone is looking, aiding social communication. Here, the researchers test their hypothesis that this white surface also serves as a visual display of information about a person's health. First, they showed subjects pictures of eyes that were digitally reddened, yellowed, whitened (i.e., "super-white"), or unaltered (see Fig 1 above). They then had the subjects rate the healthiness, attractiveness, and age of each set of eyes. As you might expect, the red and yellow eyes were rated as significantly less healthy, attractive, and young as the control or super-white eyes. Interestingly, they also found that people rated the super-white eyes as younger, though not healthier or more attractive, than the unaltered eyes. Visine, anyone?

Red, yellow, and super-white sclera : uniquely human cues for healthiness, attractiveness, and age. "The sclera, the eye's tough outer layer, is, among primates, white only in humans, providing the ground necessary for the display of colors that vary in health and disease. The current study evaluates scleral color as a cue of socially significant information about health, attractiveness, and age by contrasting the perception of eyes with normal whites with copies of those eyes whose whites were reddened, yellowed, or further whitened by digital editing. Individuals with red and yellow sclera were rated to be less healthy, less attractive, and older than individuals with untinted control sclera. Individuals with whitened, "super-white" sclera were rated as younger, although not more healthy or attractive, than controls. In humans, clear, white sclera may join such traits as smooth skin and long, lustrous hair as signs of health, beauty, and reproductive fitness. The evolution of a white sclera may have contributed to the emergence of humans as a social species." Bonus quote from the main text: "The drug, medical, and cosmetic industries acknowledge the link between white sclera, health, and beauty. For example, eye drops that “get the red out” are beauty aids that act by shrinking superficial blood vessels of the conjunctiva. There are no comparable, over-the-counter treatments to “get the yellow out.” Surgery to whiten eyes by conjunctivectomy may have devastating complications (Rhiu et al. 2012) and, judging from the present results, may yield less-than-desired cosmetic results. Whitening, whether by direct intervention or by image editing, is most likely to benefit individuals with dark irises and skin, such as Africans (Yanoff 1969) and Eskimos (Norn 1985), who often have scleral spots. Mascara and eyeliner provide noninvasive, cosmetic brightening effects by enhancing the visual contrast of the white sclera with the surrounding, darker skin. A passive approach is to hide unattractive eyes behind dark eyeglasses." 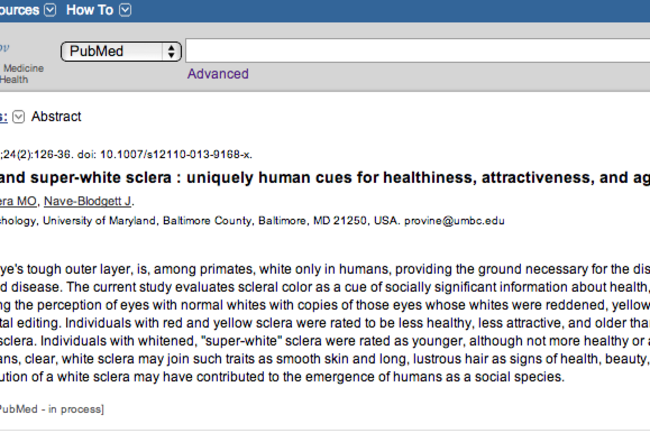 NCBI ROFL: Note to self: keep "squashed spider contents" out of eyes.