Fooled by an Illusion, Tennis Refs Make Wrong "Out" Calls 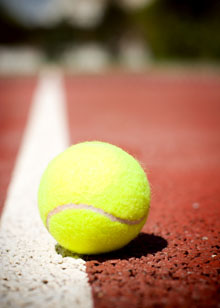 Tennis referees are far more likely to make wrong "out" calls than wrong "in" calls, according to a new study. A quirk of our visual perception system, which helps us anticipate the motion of an object, seems to bias our perception of where a speeding tennis ball stops moving.

"This is not a problem with referees," says study co-author David Whitney.... "It’s a consequence of human visual processing … a visual illusion caused by a mechanism that allows the system to localize a moving object" [Scientific American].

The idea to study this visual illusion in a real-world context came to Whitney during a Wimbledon match as he watched a player challenge and overturn a referee's call. For the study,

published in Current Biology [subscription required], the researchers used Hawk-Eye technology, a system of high-speed cameras that is often used for contested calls in tennis matches.

Three scientists independently reviewed video and instant replay of 4,457 randomly selected points from the 2007 Wimbledon championships. Of the 83 calls that the video and instant replay showed were wrong, 70 were "out" calls [Scientific American]. Without the visual bias, there should have been the same number of wrong "out" calls as "in" calls.

The visual system is sluggish," said Dr Whitney. "It takes a hundred or more milliseconds for us to become aware of an image that strikes our retina" [Telegraph]. If the object is moving fast, the brain produces an illusion that the object has moved slightly further than it actually has in order to overcome this lag [BBC News]. The illusion is what allows us to catch a flying frisbee or dodge a snowball.

But during tennis matches, the same mechanism increases referee error and probably puts players who receive "out" calls at a unfair disadvantage. Without the benefit of Hawk-Eye technology, the researchers would advise players to challenge more "out" calls. "Because players are allowed to continue challenging calls as long as the challenges are correct, players should predominantly challenge those calls that are consistent with the perceptual error revealed here," the scientists said. "Players who make better use of their challenges benefit more" [Independent].