fMRI of the Amygdala: All In Vein?

Neuroscientists might need to rethink much of what's known about the amygdala, a small brain region that's been the focus of a lot of research. That's according to a new paper just published in Scientific Reports:

The amygdala is believed to be involved in emotion, especially negative emotions such as fear. Much of the evidence for this comes from fMRI studies showing that the amygdala activates in response to stimuli such as images of scared faces. However, according to the authors of the new paper, Austrian neuroscientists Roland N. Boubela and colleagues, there's a flaw in these fMRI studies. The problem, they say, is that the amygdala happens to be located next to a large vein, called the basal vein of Rosenthal (BVR). fMRI works by detecting blood oxygenation, so changes in the oxygen level in the blood within the BVR could produce signal changes that could be mistaken for activation in the amygdala. Because the BVR drains blood from several brain regions, some of which are themselves involved in emotion processing, the BVR could act as a proxy for emotion-related neural activation elsewhere in the brain, which is then projected onto the amygdala. Neuroscientists have long been aware of potential large vein contributions to the fMRI signal, but it hasn't generally been seen as a serious concern. According to Boubela et al., however, the problem is serious, when it comes to the amygdala. In a series of MRI scanning experiments using high resolution fMRI alongside susceptibility weighted imaging (SWI), a method that reveals the structure of blood vessels, Boubela et al. say that they've shown that

The key result can be seen in this image, showing the fMRI neural activation in response to images of fearful faces compared to neutral stimuli. The large red blob at the bottom is the visual cortex. Above this can be seen two long, thin, S-shaped blobs which, Boubela et al. say, is the BVR on the left and right sides of the brain. The white arrows represent the emotion processing hotspot of the amygdala, according to a published meta-analysis of brain activation to emotional stimuli. This location is right next to the BVR. 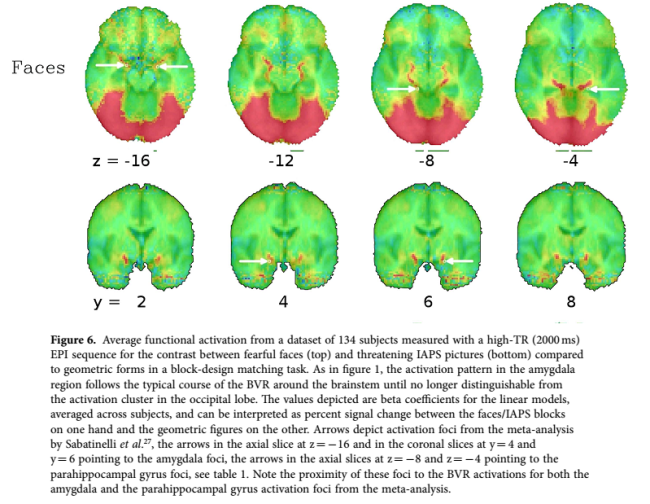 This discovery has rather wide-ranging implications. Most immediately, it casts doubt on previous findings on amygdala function that rely solely on fMRI as evidence... [we do not] want to dispute the role of the amygdala in the processing of emotions per se, as this is established well enough even when completely disregarding all fMRI evidence. [But] one should be wary of fMRI signal changes in this region...

And they say, the problem might not be limited to the amygdala: "It is plausible that such effects might also occur in other areas of the brain characterized by the presence of large vessels", and they cite the parahippocampal gyrus and the insula as other potential trouble-spots.