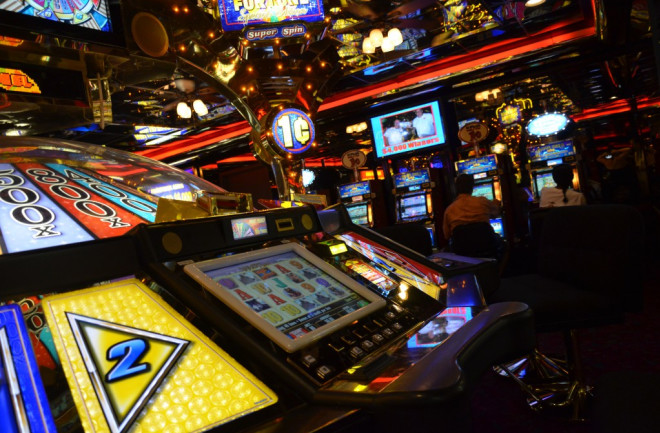 (Credit: Michael Kappel/Flickr) Casinos are exciting places. Glitzy facades, riotous color schemes, waitresses in skimpy outfits all combine to assault the senses. The action never stops and people often lose track of time — not to mention their money. Scientists at the University of British-Columbia, in a new study, demonstrated there's a method to the madness: They found that flashing lights and animated sounds encouraged rats to take risks in a simple gambling game. The sense-pleasing fanfare associated with striking it big at a casino, researchers say, plays a key role in convincing us to keep pressing our luck.

Using a rat-adapted model of the Iowa Gambling Task, the researchers taught rats to play a game of chance. The rats could nudge one of five buttons to receive a sugar tablet. The odds of earning an award were different for each button, but bigger wins corresponded with lower odds, just like a casino. Under normal circumstances, the rats soon learned to press the low-risk, low-reward button, which maximized the number of sugar tablets they received. However, when winning was paired with flashing lights and sounds, the rats changed their behavior entirely. Instead of going for the safe option, they chose the high-risk, high-reward button. The researchers theorize that the additional sensory cues stimulated dopamine production in the rats' brains, and caused them to feel excited and happy. The presence of exciting stimuli essentially turned the rats into compulsive gamblers, chasing the pleasurable high of striking it big. They published their findings Wednesday in the Journal of Neuroscience. As a next step, the researchers injected the rats with dopamine receptor-blocking compounds. Dopamine receptors are responsible for increasing feelings of pleasure when something good or exciting happens to us, such as seeing triple sevens pop up on a slot machine. The rats with a specific dopamine receiver, the D3 receptor, blocked returned to playing the safe option when gambling. The D3 dopamine receiver has been linked to many forms of addiction. [embed]https://www.youtube.com/watch?v=y2CWiisD5p4&feature=youtu.be[/embed]

The researchers say that their findings are new insights into the behavior patterns of compulsive gamblers, which closely reflect drug addiction. In both cases, the brain is repeatedly exposed to pleasurable stimuli and eventually becomes dependent on that stimuli. In problem gamblers, the experience of winning is comparable to a drug high, stimulating the release of dopamine in their brains and leaving them craving more. By tying the presence of lights and sounds to an increase in dopamine production, the researchers discovered something that casinos knew all along: It’s all about the experience. This is why casinos are such fabulous, opulent places, with lights going off and bells clanging. Winning becomes a full-on sensory experience that stimulates our brains in a much deeper way than just getting paid does. The researchers say their study offers new ways to treat problem gamblers. They suggest that future studies could look at the effectiveness of drugs that inhibit the same dopamine receptors in humans to, perhaps, treat problem gamblers. https://www.youtube.com/watch?v=0Mw50JsaESY So the next time you get lucky at a casino, it might be worthwhile to step away for a little before you pull that lever again.

More From Discover
Mind
Why We Are Fascinated With Serial Killers
Mind
What Happens When Scientists Put a Human Intelligence Gene Into a Monkey?
Mind
What is Anxiety and How Can Worries Overpower Us?
Mind
How Your Brain’s “Fingerprints” Could Diagnose Disease
Mind
Can't Resist a Black Friday Deal? Here's Why
Mind
Relaxing ASMR Sounds are Harder to Re-Create Than You’d Think
Recommendations From Our Store
My Science ShopDiscover STEM Kits
My Science ShopDiscover 2022 Calendar
My Science ShopStrange Science
My Science ShopElements Flashcards
Shop Now
Stay Curious
Join
Our List