Fish Want to Play Too 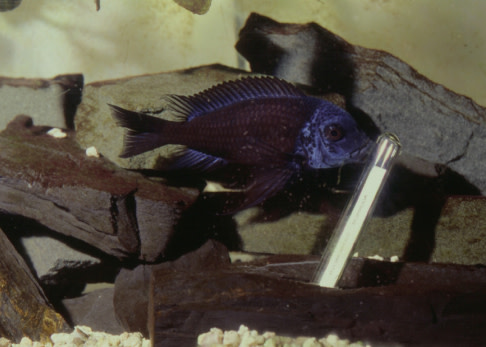 Yes, fish. These aquarium lap-swimmers and pursuers of flaked food aren't known for their joie de vivre. Yet in one hobbyist's tanks, scientists say they've captured a rare instance of fish playing around. James Murphy is a herpetologist at the Smithsonian National Zoological Park. Although he professionally studies reptiles and amphibians, he keeps fish as a hobby. It was one of his cichlids—a 5-inch fish of the species Tropheus duboisi—that first caught his attention by inventing a game. A weighted thermometer sat at the bottom of the fish's tank, and the fish would repeatedly whack this thermometer with its head and let it bounce back. The behavior was hard to miss: the sound of the fish knocking the thermometer around could sometimes be heard from the next room. Although examples of playful mammals are plentiful, such behaviors are harder to find in other groups of animals. Play examples in fish are especially controversial and difficult to come by, say Murphy and his coauthors, Gordon Burghardt and Vladimir Dinets of the University of Tennessee, Knoxville. To make sure that what they were seeing was really play, the authors checked it against a list of five criteria: Does the behavior have no clear function? Is it voluntary, spontaneous, or rewarding for the animal? Does it look different from functional behaviors? Does the animal repeat it? And does it happen while the animal is unstressed? In all, three different male T. duboisi fish showed the thermometer-bopping behavior. The scientists recorded the three individuals for a total of more than 30 hours of video footage. The fish lived separately—in other words, they didn't learn the behavior from watching each other. Nonetheless, they each figured out that the thermometer in their tank could be a kind of toy. Each of the three cichlids put its own spin on the game. One fish repeatedly attacked the top end of the thermometer, hitting it again and again when it bounced back. Another fish would circle the thermometer, like a boxer, "while engaging in a bout of several quick contacts." The third fish really went after the thermometer. It would wail on the middle and bottom of the device, sometimes making it pop up into the water—at which point the fish batted the thermometer across the whole tank until it got stuck in a corner. The scientists decided that this behavior met all their criteria for play. It was totally pointless, for one thing. The fish seemed to find it rewarding, and they did it when they weren't stressed. Hitting the thermometer probably wasn't a confused search for food, since these fish aren't predators (they nibble algae in the wild). It was also not a misplaced mating attempt. The researchers are confident of that because of how courtship works in T. duboisi: "The male approaches the female and vibrates his body vigorously," they write. "If she is ready...they circle and she lays a few eggs. On the next pass, he fertilizes the eggs and she circles again and picks them up in her mouth." In the videos, none of the male cichlids vibrated their bodies or otherwise seemed to mistake the thermometer for an attractive female. So thermometer thwacking seemed to truly be a game. The authors point out, though, that "labeling a behavior as play does not explain it." It also doesn't explain why Tropheus duboisi, out of the dozens of fish species Murphy has kept in tanks with an identical thermometer, is the only species that started playing with it. Burghardt and Dinets say they don't know of a specific trait in T. duboisi that might make it more likely to play. Dinets points out that "play does seem to correlate with complex, flexible behavior," and cichlids in general are "known for behavioral complexity." However, he adds, "there doesn't have to be an explanation." Maybe it's just fun. Image: by Ann Hawthorne.