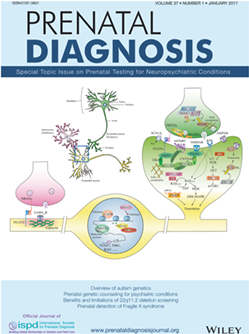 The alleged case of antenatal autoeroticism was reported by Spanish gynecologists Vanesa Rodríguez Fernández and Carlos López Ramón y Cajal in September last year. Their paper was called In utero gratification behaviour in male fetus. Here's the ultrasonic evidence of the act: 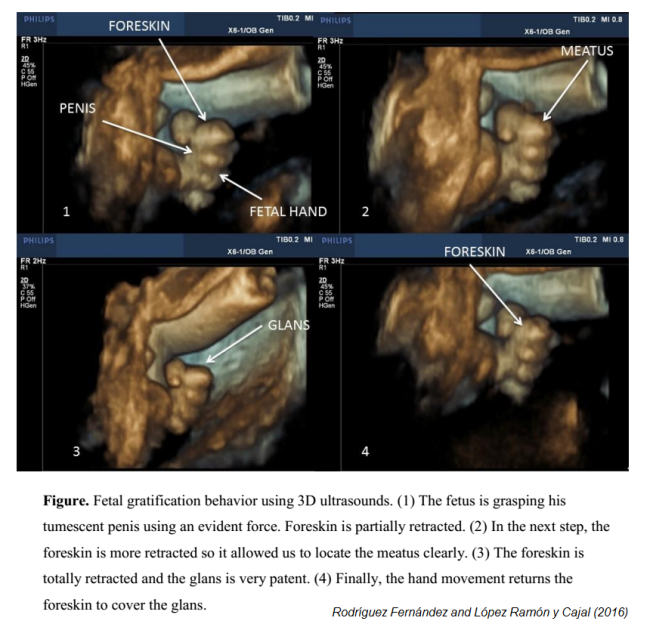 Rodríguez Fernández and López Ramón y Cajal wrote that "This is a very clear sexual behavior 'in utero' in the 32nd week of gestation", speculating that the fetus may have been comforting himself by the behaviour. However, not everyone was convinced by these claims. In March 2017, Prenatal Diagnosis published a rather scathing 'Comment' on Rodríguez Fernández and López Ramón y Cajal's paper. The author of the critique was Israeli ultrasound expert Israel Meizner, and he pulled no punches:

Looking at Figure 1 presented in the letter, one would have to conclude that the authors have made one huge error in the interpretation of the pictures presented. Picture no. 1 in Figure 1 represents a grasped normal hand with five fingers. What the authors mark as foreskin is the normal index finger. In picture no. 2 in Figure 1, one can see the flexed hand with five fingers. What the authors mark as meatus is the flexed index finger, a bit drawn backwards. The normal penis and scrotum are clearly visible in this picture, appearing medially to the clenched hand. I have indicated real penile tip and scrotum on a photocopy of picture 2, enclosed herewith.

Meizner included a (rather grainy) figure with what he says is the "Real Penis" helpfully labelled in yellow - and it's not in the fetus's hand: 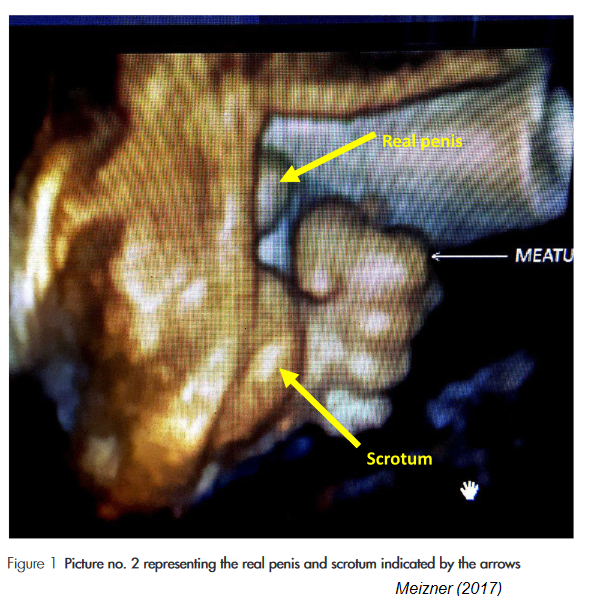 López Ramón y Cajal and Rodríguez Fernández didn't take this criticism of their ultrasound interpretation skills lying down, however. In their Response to Meizner's criticism, they indignently deny having made any anatomical errors:

We do not agree with your analysis; the image is a snapshot of an exploration that was performed over a period of 30 min. Typically, I work using two ultrasound machines and seven transducers (three-dimensional mechanical and electronic transducers). The behavior reported in our study was observed and confirmed by several doctors over a period of time... I would be happy for you to visit my hospital and ultrasound lab to witness this.

According to López Ramón y Cajal and Rodríguez Fernández, it was in fact Meizner who made an anatomical blooper. What Meizner called the "Real Penis" was actually the umbilical cord, they say. They also point out that it was Meizner himself who published the first ever report on pre-natal self-pleasure, in 1987. So who is right in this dispute? I'm not sure, but what does seem certain is that the fetal masturbation controversy ranks among such great scientific debates of the past as Huxley-Wilberforce, Bohr-Einstein, and Gould-Dawkins. It's also fair to say that life is never dull for 32-week old fetuses these days. If researchers aren't peeping at their private moments, they're shining lasers at them.