Another day, another over-hyped sex differences neuroscience study. The headlines this time around are especially cringeworthy:

Study Finds Women’s Brains Are Far More Active Than Men’sWomen Are Using A LOT More Of Their Brains Than Men. Surprise, surprise ?Women really DO overthink things! Scans reveal they have ‘more active brains than men’

The paper in question was published in the Journal of Alzheimer's Disease and it comes from a group led by Dr. Daniel Amen. Amen is a controversialpsychiatrist who claims to be able to diagnose and treat mental illness with the help of a brain scanning technique called SPECT. SPECT is not widely accepted for this purpose. Personally, I think Amen's SPECT psychiatry is dangerous and unscientific. However, to be fair, Amen is in a good position to study sex differences using SPECT. His "Amen Clinics" have carried out tens of thousands of SPECT scans, meaning that Amen probably has more of this kind of data than anyone else in the world. And, to be fair, the new paper is actually pretty solid. Amen et al. found a convincing sex difference in brain blood flow as measured using SPECT, in 119 healthy subjects and a whopping 26,683 Amen Clinic patients. Across most of the brain, women on average had higher blood flow than men: 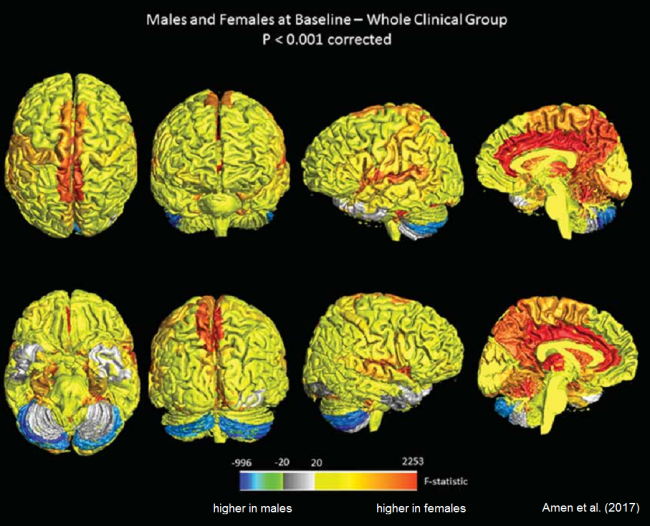 The sex difference was modest in size. For total brain blood flow, the effect size Cohen's d was 0.34 at baseline, and d = 0.37 in participants performing a cognitive task. In healthy controls, the whole-brain differences were larger: d = 0.65 baseline and d = 0.55 task. A Cohen's d of 0.5 is conventionally considered a "moderate" difference. So the difference wasn't huge, but given the enormous sample size in this study, it seems robust. However, it's important to remember that this was a study of blood flow, not of brain activity. These results do not mean that women's brains are more active, or that women use more of their brains, or that they're prone to "overthinking". The results simply don't tell us that. All we know is that more blood flows through blood vessels in the female brain. There could be many possible explanations for this. In fact, to me, the results suggest that the sex difference may be a basic physiological one, rather than a reflection of different patterns of brain activity. If women's brains were carrying out more activity at baseline ("overthinking"), you'd expect the sex difference to be smaller during a cognitive task, on the grounds that neither males nor females would be at baseline in this condition. In fact, the sex difference was if anything larger during the cognitive task. Overall, this is a surprisingly good paper given its provenance, but don't believe the headlines.