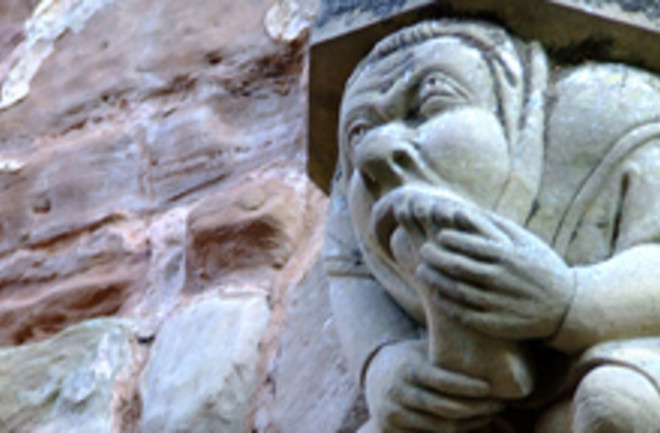 It's the date of your dreams. As the waiter pours the wine, you're pouring on the charm. Then it happens: You uncork the most embarrassing, oafish and inappropriate thing you've ever uttered. And as a look of pure get-me-out-of-here takes hold on your date's face, you think, "How on Earth could I have said that!" [Toronto Star]

Now, Harvard psychologist Daniel Wegner suggests that the embarrassing phenomenon of putting your foot in your mouth comes from your brain's overzealous attempt to avoid social gaffes.

Wegner describes accumulating evidence that suggests many of our embarrassing moments are the result of miscommunications between conscious and unconscious mental processes [LiveScience].

Sitting across the table from your date, you may consciously run through the worst possible things you could say: an insulting remark regarding her ethnicity, perhaps, or an inappropriate sexual allusion. While your conscious mind then moves on to other subjects, the unconscious mind begins a ceaseless scan for those unwelcome thoughts. It's that monitoring mechanism that can lead to trouble. When

Before you know it, an unwanted thought has made it into your dinner conversation, and your date is recoiling in horror. For the review article, published in Science, Wegner combed through 60 related neuroscience and psychological studies to get to the root of why people say exactly the wrong thing sometimes, as well as the related phenomenon of doing the wrong thing, like missing a crucial golf putt. Wegner says that one strategy to avoid such failures is to

While that strategy may sound more appropriate for the golf course than the dating scene, Wegner says the same principle holds true.

"The person who wants to avoid saying awkward things on the first date — well, by the 30th date, they’re not doing it anymore. They have to just brave it. In sports we know this, but we don’t think of social life the same way" [Wired.com]

, he says. Related Content: 80beats: Stuart Smalley had the Right Idea: Self-Affirmations Boost Grades for Some 80beats: “Expert” But Bad Financial Advice Turns Off Decision-Making in the Brain 80beats: Brain Scan Can Predict When You’re Going to Screw Up