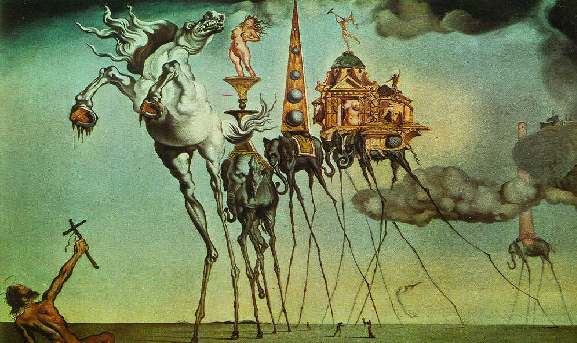 A new paper in the journal European Neurology reports on a remarkable case of perceptual distortion that'll please any connoisseur of neurogothic:

A 48-year-old woman woke up one morning without knowing where she was. She recognized her husband and finally realized that she was at home, but reported that she felt that all surroundings appeared ‘strange’ to her. She did not report any changes in the shape of furniture, rooms and people, but complained that voices and noises were ‘dinosaurs shouts’, or were made by ‘prehistorical beasts’... After arriving at the hospital, she continued to complain that the surrounding sounds were made by dinosaurs, even adding that these were of the meat-eating type. She was not confused, she knew that she was in the hospital, and she reported the exact date.

body distortion above the waist (especially the face) in people that he knew previously, not in people that he saw for the first time. He described Afro-style hair, sunken eyes, large ears, elongated eyebrows, saw-like teeth, discolored fingers and no nails. He reported that these perceptions were not real and were-not frightening...

MRI scans revealed that both patients had suffered strokes damaging the dorsomedial nucleus of the thalamus. The strange experiences stopped within a few days, and both of the patients made a good recovery. The authors of the paper, neurologists Montserrat Delgado and Julien Bogousslavsky, say that these 'monstrous' perceptual alterations are a newly described syndrome. They're not like classic hallucinations, in which sights and sounds appear 'out of nowhere'. Nor are they the same as pareidolias, in which a random pattern or background is mistaken for a familiar thing. Rather, these patients experienced distorted perceptions, in which familiar things appeared fantastic and unreal. The authors dub this distorteidolia.