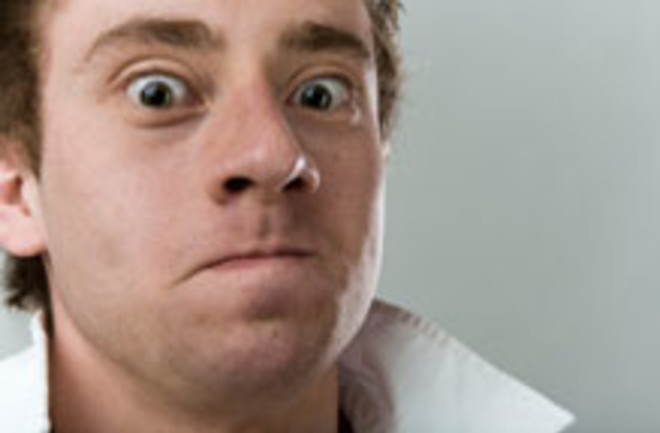 When confronted with something truly terrifying (say, for example, an irritated grizzly bear), most human faces assume the same expression, with bulging eyes and flaring nostrils. Researchers have long suspected that those facial adjustments serve some evolutionary purpose, but the mechanism has been unclear for over a century. Now, a study presents an answer that seems rather obvious in retrospect. Those wide-open eyes and flared nostrils take in more sensory information, which helps when you're trying to figure out how to evade swiping bear claws. Curiosity about the purpose of facial expressions goes back to Charles Darwin. In 1872, Darwin published The Expression of the Emotions in Man and Animals, which discussed the similar facial expressions found across human cultures and in some animal populations, and theorized that the expressions must have some evolutionary benefit. He guessed that the advantage lay in the ability to communicate emotions, which could reduce misunderstandings and help a group function efficiently.

Later scientists followed Darwin's train of thought and discovered that the expression of emotions is strikingly similar across cultures—horror and disgust look pretty much the same on the face of a New Yorker as they do on a Nigerian, and people from different cultures can recognize emotions such as happiness, anger and surprise on others' faces, even if they don't share a language. The fact that emotional expressions seem to be universal led scientists to believe they weren't used only for communication and social purposes, but also served an additional adaptive biological function [LiveScience].

The new findings published in Nature Neuroscience [subscription required] suggest that even though facial expressions are useful socially, they probably evolved first as a way to improve sensory perceptions at a time of crisis. In the study, [neuroscientist Joshua] Susskind developed computer models for the facial expressions of fear and disgust. He then trained volunteers to pull each face. A fearful expression required participants to widen their eyes, raise their eyebrows and flare their nostrils, while a disgusted face was the opposite: a lowered brow, closed eyes and scrunched-up nose.

Measurements from video footage revealed those pulling fearful faces were not only better at spotting objects either side of them, but scanned their eyes faster, suggesting they could see danger coming more quickly [The Guardian]. These test subjects also had improved air flow through their noses. All of these reactions would be helpful to a human in the midst of a "fight or flight" response, as he tries to decide between brawling and running away.

Researchers also discovered that facial expressions that signify disgust serve the opposite purpose, and decrease both field of vision and air flow. Again, it seems somewhat obvious in retrospect: How much sensory information do people really want about a chunk of rotting meat? Image: istockphoto

More From Discover
Health
Decorate For the Holidays Early and it Might Improve Your Mood
Mind
Music Inspires Powerful Emotions On Screen, Just Like In Real Life
Health
Swearing Like A Sailor May Not Be Such A Bad Thing
Health
5 Things You Probably Didn't Know About Snot
Health
Can You Predict a Panic Attack?
Mind
Could Positive Thinking Do More Harm Than Good?
Recommendations From Our Store
My Science ShopDiscover STEM Kits
My Science ShopDiscover 2022 Calendar
My Science ShopStrange Science
My Science ShopElements Flashcards
Shop Now
Stay Curious
Join
Our List