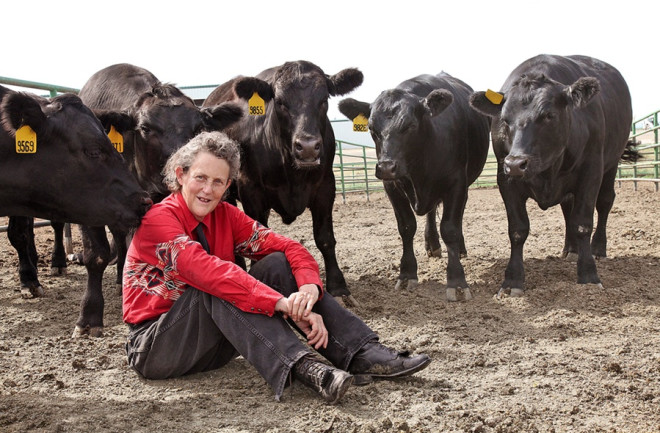 Animal scientist Temple Grandin has an extraordinary mind. Probably the world’s most famous person with autism, she designed widely used livestock handling systems to reduce animal suffering. She is not just autistic but an autistic savant, meaning that she has unusual cognitive abilities, such as a photographic memory and excellent spatial skills. She “thinks in pictures,” she says, helping her understand what animals perceive.

Picture of the Past Grandin’s left medial temporal lobe—involved in memory—appears in pink in this MRI. The white crescent is her corpus collosum, a bundle of fibers that connects the two hemispheres of her brain. MRI: Jason Cooperrider

Her brain is equally remarkable, according to a team of neuroimaging experts who study brain changes in autism at the University of Utah. Neuroscientist Jason Cooperrider and colleagues scanned Grandin’s brain using three different methods: high-resolution magnetic resonance imaging (MRI), which captures the structure of the brain; diffusion tensor imaging (DTI), a method to trace the connections between brain regions; and functional MRI, which indicates brain activity. The images reveal an unusual neural landscape that reflects Grandin’s deficits and talents.

Overall, the right side of her brain dominates. One theory of autistic savantism suggests that during fetal development or early in life, some developmental abnormality affects the brain’s left side, resulting in the difficulties that many autistic people have with words and social interaction, functions typically processed by the left hemisphere.

Left Out If brain tissue is damaged or does not develop fully, the ventricles—vessels filled with cerebrospinal fluid, shown in blue in this image based on neuroimaging work—expand to fill the space. Temple Grandin’s enlarged left ventricle is a sign of abnormalities in her left hemisphere, which typically handles language, and may account for the difficulties she has with processing words. Roen Kelly/DISCOVER, from Jason Cooperrider

To make up for this, the right hemisphere sometimes overcompensates, which can lead to special abilities in music, art, and visual memory. Savantism is not well-understood, but between a tenth and a third of people with autism may have some of these abilities.

Cooperrider’s team also discovered that Grandin’s amygdala, the almond-shaped organ said to play an important role in emotional processing, is larger than normal. This was not a surprising finding because among other functions, this region processes fear and anxiety, affective states often affected by autism. Her fusiform gyrus is smaller than normal—also not a surprise, since this region is involved in recognizing faces, a social skill that autism may disrupt.

Every brain is different, especially where autism is concerned, and Cooperrider’s study compares Grandin’s brain with only three controls, not enough to draw broad conclusions. But some of the patterns Cooperrider and his colleagues discovered back up other studies, and suggest new regions to explore.

More From Discover
Mind
What Foods Can Give You Nightmares?
Mind
Why We Are Fascinated With Serial Killers
Mind
Nostalgia and Thinking About the Future Can Be Good For You
Mind
How Your Brain’s “Fingerprints” Could Diagnose Disease
Mind
Can't Resist a Black Friday Deal? Here's Why
Mind
Relaxing ASMR Sounds are Harder to Re-Create Than You’d Think
Recommendations From Our Store
My Science ShopDiscover STEM Kits
My Science ShopDiscover 2022 Calendar
My Science ShopStrange Science
My Science ShopElements Flashcards
Shop Now
Stay Curious
Join
Our List