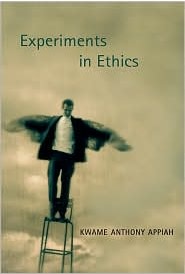 If the trolley problem is not known to you, I would recommend Kwame Anthony Appiah's Experiments in Ethics. It is one of those works which combines brevity with density, a feast of ideas laid out before you which is nevertheless consumable in a minimal span of time. And Appiah is an engaging writer to boot, switching seamlessly between informal and elevated registers. I suspect the last is a reflection of his interactions with younger people in the form of graduate students in concert with his British philosophical training. In Experiments in Ethics Appiah takes the tack of an experimental philosopher in exploring the shoals of human moral sense and sensibility. There are three threads which work their way through narrative: history of philosophy, empirical results from various disciplines which speak to ethical questions and finally the Big Questions of the good and right life. These threads are naturally not clear and distinct, fading into each other. Appiah argues plausibly that experimental philosophy with its diverse toolkit is actually more in keeping with the spirit of the discipline as it has been practiced for most of its history. What we know of as philosophy is an orphaned creature, shorn of its innumerable daughter disciplines, the natural and human sciences. As I am already one who accepts the proposition that understanding human nature through a priori means is a fool's errand Appiah's brief against the universality of the reflective insights, intuition and introspection of professional philosophers finds a ready audience. Yet even though Experiments in Ethics proselytizes for novel if true & tested methods to revitalize the most ancient of intellectual endeavors, Appiah nevertheless remains focused on questions which philosophers traditionally ask. In concert with cognitive scientists experimental philosophers seem to have rather convincingly toppled the methodological presuppositions as to the powers of reason of individual scholars. But at the end of the day this is a case of being unable to put Humpty-Dumpty back together. Even though the emperor has no clothes at least he had some moral clarity. After ripping through the pretensions of contemporary wisdom it seems that we're left back at the doorstep of Nicomachean Ethics. But is that truly so bad? Related: For a meatier review, I recommend Morality Studies by the cognitive psychologist Paul Bloom.