Everything Worth Knowing About ... Creativity 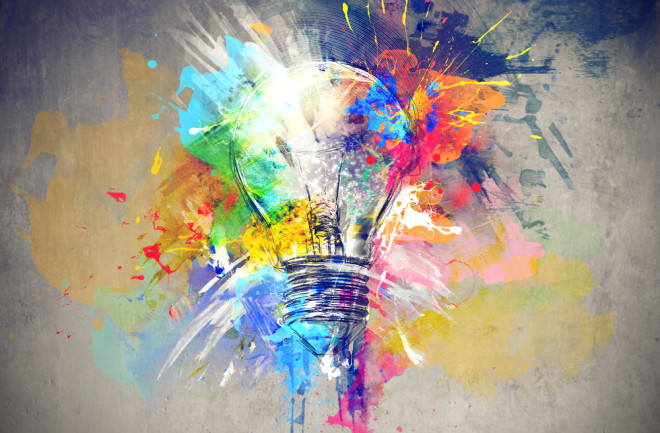 (The solutions to the creativity tests from p. 51 in the print edition can be found at the bottom of this article.)

Original, useful, surprising — some of the main criteria for what it takes to consider something creative. However, creativity is an enormously complex subject full of seeming contradictions, and the person doing the actual creating is just as important as the process and outcome. We offer up an overview of what science says about creative people, as well as a chance to test your chops.

What Do You ‘Need’ to Be Creative?

There’s no single source of creativity; instead, research suggests that it stems from a complex system of traits. Here are just some of the overarching characteristics creative people seem to share.

Low latent inhibition levels: Creative people usually aren’t so great at ignoring things that are irrelevant to the task at hand. It’s likely thanks to their brains. Several studies show that creative types tend to have low levels of a certain kind of dopamine receptor in the thalamus, a brain area that helps regulate motor function and sensory perception. Having fewer of those receptors probably means the thalamus filters out less information, so there’s more information available to help make unusual connections — a hallmark of creativity.

An inner drive to create: Being passionate about something often leads to related creative ideas. Research supports the notion that if you pursued your childhood passions into adulthood, you’re more likely to test high on creativity measures. But simply being enthralled with something isn’t enough — you also need hard work to make it over the hurdles that inevitably crop up during the creative process.

An “open” personality: Perhaps the most important factor that leads to creativity is how open to experiences you are. People who score high in this personality trait are more likely to want to try new things and to be curious, perceptive, imaginative, intellectual and, naturally, more creative. In fact, a 2013 study from The Journal of Creative Behavior supports the idea that openness to experience can be more important to creativity than IQ. And, the more open you are, the more opportunities exist for inspiration to strike and fuel an innovative idea.

How Can You Spark Creativity?

1. Have hope: When you’re hopeful, you’re aware the outcome might not be positive, but you’re motivated anyway. And the literature seems to support that having hope actually helps people come up with more original connections and ideas.

2. Take a hike: No, seriously. It turns out a nice walk, especially in the great outdoors, can help us solve problems. The physiological changes associated with walking, like lower stress levels, lower arousal levels and an overall better mood, can promote more creative thought connections in the brain.

3. Go it alone ... then put your heads together: Alone time and the space it provides is vital in coming up with a creative solution. But once the lightbulb goes on, creative types often take that idea to a group to hash it out and turn it into a solution.

4. Meditate: Speaking of going it alone, meditation can be a boon to getting the creative juices flowing, though only specific types of meditation. You don’t want to totally suppress your thoughts. Instead, experts say, try meditation that allows you first to recognize wandering thoughts and then to bring your focus back to the present. According to a 2014 Frontiers in Human Neuroscience study, this nondirective meditation can activate brain areas associated with memory retrieval and emotion.

6. Just do it: It seems like a no-brainer, but the more ideas you come up with and try out, the more likely it is something will stick. In analyses of adults who were flagged as geniuses, only a small percentage of their creative ideas ended up leading to a substantial solution. So keep at it!

In the Creativity section (p. 50-51) in our "Everything Worth Knowing" special section, we included a sidebar with a few exercises for you to test your own creative chops. Here, you’ll find some resources to flesh those snippets out:

Find a word that links the three words provided in each example.

The answers are as follows:

These are just a small sample of questions pulled from something called the Remote Associates Test. If you want to try your hand at some more of these, you can find a much longer test online.

Look at the images below and use the lines already there to draw a picture.

These image is taken from the incomplete figures section of the Torrence Tests of Creative Thinking. And the images below just a couple of the ways part test-takers transformed the simple squiggles they started with into a creative sketch.

You have a candle, a box of thumbtacks and a pack of matches. Use these items to fix the candle to the wall without letting the melted wax drip to the table below.

This head scratcher is Karl Duncker’s famous candle problem. Officially, the test is supposed to measure something called functional fixedness — a cognitive bias that shows how caught up you get in thinking an object can only be used for its traditional or specified purpose. (People who have a hard time solving this puzzle usually forget that the box holding the thumbtacks can be emptied and used on its own.) But it’s often seen as one measure of creative thinking as well.

[This article originally appeared in print as "Creativity."]