Every Neuron of a Fruit Fly Brain, In Nanoscopic Detail 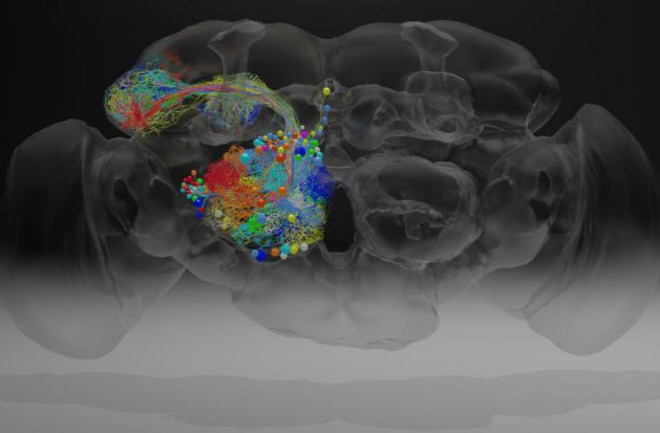 Researchers at the Howard Hughes Medical Institute have imaged the entire fruit fly brain in high resolution. The neurons traced here (in color) route information about smell to a brain region that handles memory and learning. (Credit: Z. Zheng et al./Cell 2018) Those fruit flies buzzing around your pantry might be pesky, but to a neuroscientist, they’re a gold mine of information. The insects, tiny though they may be, are surprisingly sophisticated, boasting at least 100,000 neurons in a brain that handles everything from navigating via visual cues to complicated grooming rituals. For years, brain experts have been chiseling away at the daunting task of mapping this tiny insect’s brain, which is about the size of a poppy seed. And now, researchers have a high-resolution image of the entire fruit fly brain — a crucial tool for mapping out the connections between neurons. In a paper published in Cell, Davi Bock, a neuroscientist at the Janelia Research Campus at Howard Hughes Medical Institute, and his team describe how they used a technique called electron microscopy (EM) coupled with new high-speed imaging tools to create the portrait.

Seeing the Spaghetti Strands EM, as you’d guess, uses a beam of electrons to image things. Because the wavelength of electrons is much shorter than that of regular light, EM pictures come out in super fine, high resolution. But, like any visual, you still need contrast to figure out what you’re actually looking at. To pick out individual neurons in the brain, Bock and his team stained the cells’ membranes with heavy metals. Wherever the metals were highly concentrated, electrons would scatter and reflect, resulting in darkened sections; wherever the metals were scarce, electrons would pass right through. This, Bock says, “lets us see the strands of spaghetti that are all tangled together in the big bowl that is the brain.” But you can’t just pop an entire brain under an electron microscope and get this level of detail. The group first had to harden the brain in a resin, “like Han Solo in carbonite,” Bock says, and then cut it into 7,062 miniscule slices. Then, they imaged each slice by 850-micron-sections (about .03 inches) at a time, and digitally stitched the resulting 21 million images together. In the past, capturing the brain this way was a punishingly slow process. But the team built a new camera setup that helped them drastically speed things up. They were able to zip through an entire brain slice in seven minutes — five times faster than what previous tech would have enabled. And this speed was critical to the end result: a holistic view of the fruit fly brain. Thanks to such detail, Bock and colleagues also spotted some surprising stuff, including new cell types and structures in an area previously thought to be a random tangle of neurons. The Bigger Picture So why male models fruit fly brains? Because it’s a heck of a lot easier than mapping out the human brain, with its estimated 100 billion neurons. (Though there’s some debate on that figure.) “What we’re doing in this very small system that has 100,000 neurons is we’re pulling out wiring diagrams in a way that we never could before, at a scale that we never could before,” says Bock. “And it’s very likely that many of the lessons of how that system with 100,000 neurons works will translate to 100 billion. It’s our way of starting to chip away at what would otherwise seem to be an insurmountable problem.”