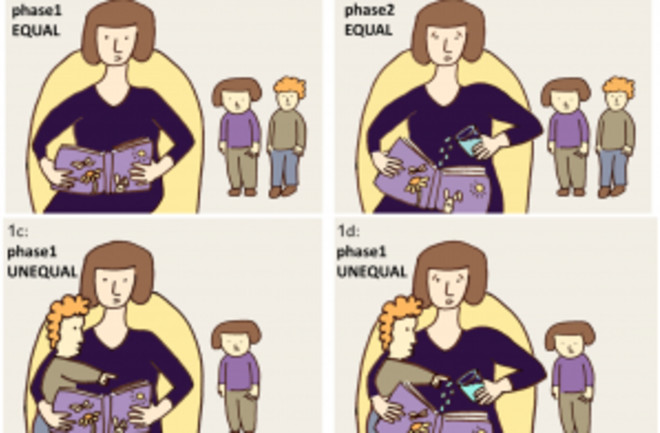 In the EQUAL condition the mother reads a book aloud to herself while the kids are playing (Figure 1a) the mother is then signaled to take the glass of water and accidentally spill water over the book (Figure 1b). In the UNEQUAL condition the mother placed the peer on her lap and embraced the child while reading a story aloud to that child (Figure 1c) and then she was signaled to accidentally spill water on the book (Figure 1d). At both conditions the child were allowed to play freely.

You are probably familiar with the concept of “schadenfreude,” a German word that means “taking pleasure in the misfortunes of others.” You’ve probably  felt schadenfreude yourself at some point, especially when the person undergoing the misfortune is a target of your envy or hatred. But at what age does this complex emotion develop? In this study, the researchers set out to determine whether very young children also experience schadenfreude. To do so, they created an experimental situation in which a child’s mother was either a) reading a book alone, while the child played with a playmate in the same room, or b) reading a book to the child’s playmate (see Figure at left). In both cases, the mother accidentally spills water onto the book, rendering it unreadable. The scientists then watched the children’s expressions and rated their emotions. As you might guess, the child whose mother was reading the book took more pleasure in the water spilling when the book was being read to his playmate, presumably because he was jealous of the demand on his mother’s attention. The response was seen in children as young as two years old, suggesting that schadenfreude in response to “termination of an unequal situation” develops early in life.

There Is No Joy like Malicious Joy: Schadenfreude in Young Children

“Human emotions are strongly shaped by the tendency to compare the relative state of oneself to others. Although social comparison based emotions such as jealousy and schadenfreude (pleasure in the other misfortune) are important social emotions, little is known about their developmental origins. To examine if schadenfreude develops as a response to inequity aversion, we assessed the reactions of children to the termination of unequal and equal triadic situations. We demonstrate that children as early as 24 months show signs of schadenfreude following the termination of an unequal situation. Although both conditions involved the same amount of gains, the children displayed greater positive expressions following the disruption of the unequal as compared to the equal condition, indicating that inequity aversion can be observed earlier than reported before. These results support an early evolutionary origin of inequity aversion and indicate that schadenfreude has evolved as a response to unfairness.”