Even Newborn Infants Can Feel the Beat 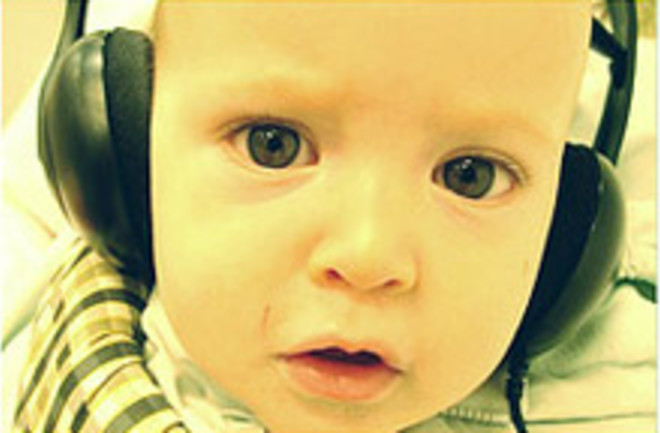 Babies just a few days old can already identify a rhythmic pattern, and their brains show surprise when the music skips a beat, according to a new study. Researchers played recordings that used high-hat cymbals, snare drums, and bass drums to make a funky little beat while monitoring the infants‘ brain activity with non-invasive electroencephalogram brain scanners, and found that newborns respond to a skipped beat in the same way that adults do.

The ability to follow a beat is called beat induction. Neither chimpanzees nor bonobos — our closest primate relatives — are capable of beat induction, which is considered both a uniquely human trait and a cognitive building block of music. Researchers have debated whether this is inborn or learned during the few first months of life, calibrated by the rocking arms and lullabies of parents [Wired News]. While the researchers who conducted the new study say their findings are evidence that beat induction in innate, others argue that the newborns could have already learned to identify rhythmic patterns by listening to their mothers’ heartbeats while in the womb.

In the study, reported in the Proceedings of the National Academy of Sciences, 14 sleeping newborns were exposed to repeated recordings of a rock drum accompaniment pattern and to four variations of that pattern. Babies were usually exposed to patterns with a downbeat. On rare occasions, the downbeat was missing. Of the 306 consecutive drum sequences presented to newborns, one in 10 lacked a downbeat. Each newborn wore scalp electrodes during the study. Drum sequences missing a downbeat elicited a signature, split-second brain response that has been linked in adults to the violation of one’s expectations [Science News].

Lead researcher István Winkler says the findings suggest that a rhythmic sensibility is very important for infants’ brain development, and says it may help them respond to the rhythmic and repetitive baby talk that lays the foundation of all future language learning. Therefore, evolution may have favored brains wired to rock for learning purposes, said Winkler, and “music went along for the ride” [LiveScience].