Even "Impartial" Jurors Use Emotion and Self-Bias in Decisions 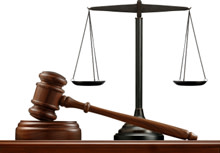 When a juror first makes a decision on the guilt of a defendant and then hands down a sentence, two entirely different regions of the brain are involved, a new brain imaging study has shown—and neither is as rational as we might want to believe. Researchers using functional MRI scans found that a brain in the process of making a decision about the guilt of another person looks a lot like the brain of a person deciding whether they themselves have been wronged; what's more, decisions about punishment are linked to brain regions that process emotions.

"Our judicial system based on third-party punishment is usually seen as cold and detached as opposed to … punishment by the victim of a crime,” [study coauthor René] Marois says. The new study shows that emotions play a part in impartial judgment too [Science News].

Judgments of the culpability of another person were linked to activity in the right dorsolateral prefrontal cortexes, researchers found; this region has previously been

implicated in decisions of morality and fairness, as well as other functions unrelated to the law. When another team temporarily blocked [activity in this region] with a magnet, participants playing a financial game that tests trust failed to punish unfair offers. No-one expected that almost the same cognitive machinery kicks in when impartially making a decision about cheating and when you yourself are cheated [New Scientist],

says study coauthor Owen Jones. In the study, published in Neuron [subscription required], researchers had test subjects read scenarios about people committing crimes and first had them determine each person's responsibility, and then declare how severe a punishment he or she deserved. In the second part of the exercise, researchers found that activity spiked in several brain areas implicated in emotion, including the amygdala, when the test subject handed out a particularly harsh sentence. However, that doesn't definitively prove that

people make punishment decisions based on emotion, Jones says. “The causal arrow could run in the other direction — having decided to punish someone severely could cause an emotional response” [Science News].

Joshua Greene, a neuroscientist at Harvard University, is intrigued by the finding that different brain processes underlie guilt and punishment. He notes that most legal systems also split criminal trials into two phases: determination of guilt and sentencing. "Our legal systems didn't fall out of the sky. They were generated by the human mind," he adds [New Scientist].