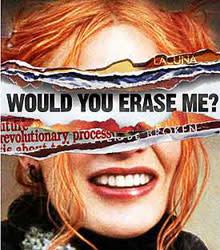 By manipulating a single protein found in the brains of mice, researchers can wipe out a mouse's specific, traumatic memory without damaging brain cells, a new study reports. While the process is nowhere near ready for testing in humans, researchers say it does raise the possibility of novel treatments for post-traumatic stress disorder and other mental health conditions.

Humans have the same so-called "memory molecule" in our brains, and the announcement is certain to prompt speculation that sci-fi scenarios of memory erasure are almost upon us.

The concept was the premise of the popular 2004 film Eternal Sunshine of the Spotless Mind, in which two former lovers pay a "memory-erasure" service to expunge the unhappy affair from their minds [HealthDay News].

In the study, published in the journal Neuron [subscription required], researchers created genetically engineered mice that had elevated levels of a brain protein called CaMKII, and also fashioned a chemical inhibitor that allowed them to turn the protein "off" and "on" at will. They then traumatized the mice by placing them in a chamber where they shocked their paws, causing the mice to associate the chamber with pain. Mice that had the CaMKII protein turned on before they were brought to the chamber the next time showed no fear, but they retained their memories of other habitats and objects.

A month later, the effect still held: Whereas the month-old memories of foot-shock ... caused normal mice to freeze with fear when placed in original testing environment, mice with overexpressed αCaMKII appeared comparatively blasé in the same environment. Many researchers believe CaMKII to be "the key molecule underlying learning and memory," commented neuroscientist Mark Mayford [The Scientist]

, and the new study elegantly reaffirms that belief. Related Content: 80beats: Can Erasing a Drug Memory Erase the Need for a Fix? DISCOVER: Conquering Your Fears, One Synapse at a Time DISCOVER: Is It Possible to Erase a Single Memory?Image: Eternal Sunshine of the Spotless Mind