Drunk Fish Convince Sober Ones to Follow Them Around 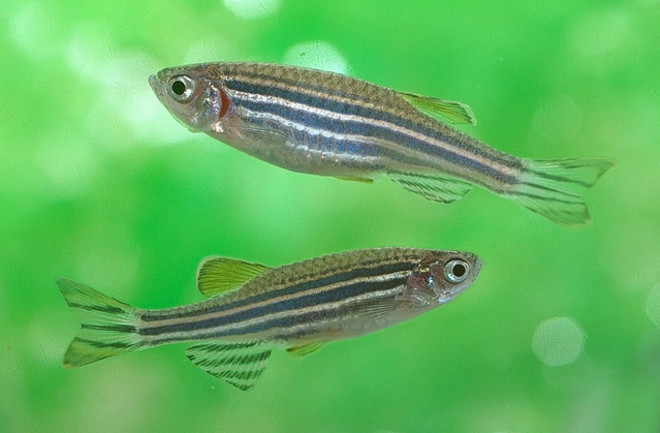 It’s a good thing fish can’t operate a vehicle. Not only do drunk zebrafish swim extra fast, but they somehow get all the sober fish to follow them. Essentially, a drunk fish becomes the designated driver for the whole group.

Although a fish is only marginally like a human, fish can be convenient subjects for scientists who want to study the effects of alcohol. That’s because to get a fish tipsy, you don’t have to force it to drink anything. You only have to put a small concentration of alcohol into its tank.* Maurizio Porfiri, an associate professor at the New York University Polytechnic Institute of Engineering, used this technique to show last year that drunk zebrafish don’t fear robotic predators.

For his latest study of intoxicated fish, Porfiri and his coauthors had their subjects swim in three different alcohol concentrations: 0.25%, 0.5%, and 1%. The highest concentration translates to about a 0.1% blood alcohol content in the fish, Porfiri says—above the legal limit of .08% for people in the United States.

Earlier studies had found that a moderate dose of alcohol makes fish more active, while a higher dose slows them down. But for this study, Porfiri wanted to see how an alcohol-exposed fish would behave when it was surrounded by sober ones.

After letting each zebrafish soak for a while in a beaker of water and ethanol, he dropped it into a tank with four sober zebrafish and watched them interact for five minutes. A camera recorded the group from above so that the scientists could measure the fishes’ movements using a tracking algorithm they’d recently developed.

Alcohol-exposed fish swam faster in a group than they did alone. This might be because moderate intoxication makes them hyperactive, as earlier studies found; they may overreact to the stimulus of seeing other fish nearby. Moderate amounts of alcohol are also known to lower fishes’ inhibitions, making zebrafish more aggressive and less afraid of unfamiliar things (or predators).

Meanwhile, the four sober fish didn’t ignore their intoxicated peer as it zipped around the tank: they followed it.

There are a couple of possible explanations for this, Porfiri says. Maybe something about the drunk fish’s one-on-one interactions with the other fish made the group as a whole move in the same direction. Or maybe the sober fish looked at their non-sober tankmate and saw a leader. “It is likely,” Porfiri says, that the drunk fish’s uninhibited behavior “is perceived as a boldness trait, thus imparting a high social status.” As they followed the drunk fish, the sober ones also sped up to keep pace, swimming roughly a third faster than they would have otherwise.

The very drunkest zebrafish, though, lost their leader status. Fish that had been exposed to the highest alcohol concentration began to lag behind the rest of the group, following instead of steering. Since higher alcohol doses have “sedative effects,” Porfiri says, the drunkest fish slow down and start to display “sluggishness in response to the rest of the group.”

Porfiri isn’t ready to conclude that being buzzed turns humans into better leaders. It’s true that one reason to study alcohol-imbibing zebrafish is to make comparisons to human behavior. But “these similarities exist at a very basic level,” he stresses. “It would take many more studies to draw direct parallels” between ethanol-dunked zebrafish and soused people. Perhaps by then, the fish will have learned how to designate a driver.

*Please don’t kill your fish trying to do this at home. I don’t want little Betta-Zoid’s blood on my hands.

More From Discover
Health
Why Caffeine Affects People Differently
Mind
Understanding Body Dysmorphic Disorder
Health
How the Pandemic Has Changed Our Relationship With Technology
Mind
Why Are We Addicted To Love?
Health
Video Game Addiction Is on the Rise. Here’s What It Looks Like
Health
Cocaine E-Cigarette Could Help People Struggling with Addiction
Recommendations From Our Store
My Science ShopDiscover STEM Kits
My Science ShopDiscover 2022 Calendar
My Science ShopStrange Science
My Science ShopElements Flashcards
Shop Now
Stay Curious
Join
Our List