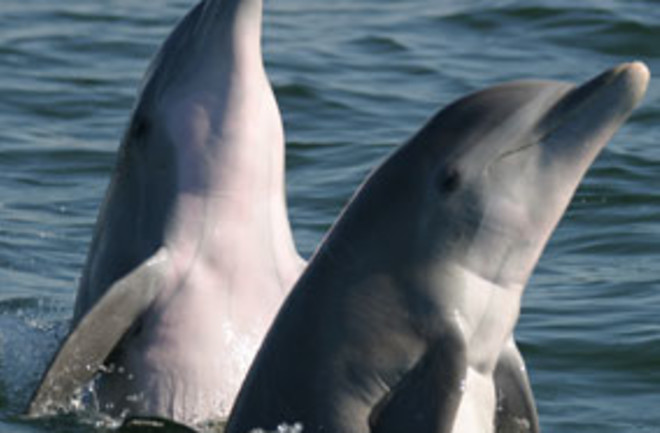 Dolphins always seem to find the most bizarre ways to make the headlines. In their most recent adventure, it appears that a dolphin named Moko has come to the rescue of two beached pygmy whales—by "communicating with the whales and leading them to safety," according to the BBC. Malcolm Smith, who was at the scene, said "there was obviously something that went on because the two whales changed their attitude from being quite distressed to following the dolphin quite willingly and directly along the beach and straight out to sea." This extraordinary tale of cetacean correspondence was also covered by CNN, The LA Times, The Daily Telegraph, The Daily Mail, and various Australianpapers. So what happened out there between Moko and the whales? Did she really communicate with them? If so, do these animals share a language—dolphinese perhaps? According to the Dolphin Communication Project, dolphins certainly communicate—they convey information using a variety of kinds of physical contact, visual signals, and sounds, such as "whistles, creaks, chuffs, screams, squawks, pops, and chirps." Using these signals, they can communicate information about their reproductive state, age, and gender, and even emotions. But while scientists acknowledge that dolphins have a complicated communication system, there's no evidence that they have a language—at least the way humans define it. The difference, according to the DCP, is that there is no evidence that dolphin communication can do the following:

So without these capabilities, how did Moko talk the whales into returning to sea? Or have the scientists been wrong this whole time, and those chuffs and squawks are actually referring to complex ideas? The DCP has their own take on the story, where they note that "Moko may have been able to communicate with them on some level - it is likely that different species of cetaceans share communication signals to some extent...Moko's communication with the pygmy sperm whales in this news story was not likely to have occurred on a complex, semantic-rich level, but if the account of the events in question is indeed true, then the whales did seem to respond to Moko on some level." They note, however, that "the whales may not have had the slightest idea what Moko was all about, but simply followed her as she swam out to sea by the sheer coincidence of her being there. With an anecdote like this, it is impossible to say what the cause of the behavior in question was." A key point is the notion of "motive"—animals communicate to one another to achieve a goal. Although cetaceans are intelligent, it seems premature to endow Moko and the whales with such an extraordinary understanding of each other's emotional and motivational states—not to mention each others' vocabulary.