Dogs Demand Fair Play, or They Won't Play at All 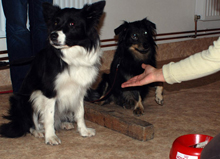 Dogs have a sense of fairness, and get jealous and upset when several dogs perform a trick but only one is rewarded, a new study has found. "They are clearly unhappy with the unfair situation", says [lead researcher Friederike]

Range. She also suspects that this sensitivity might stretch beyond food to things like praise and attention. "It might explain why some dogs react with 'new baby envy' when their owners have a child", she says [New Scientist].

While some owners may say that they've known about the deep emotional lives of their dogs for ages, the new experiments mark the first time a complicated emotion like jealousy has been observed in dogs in a controlled laboratory setting.

"We are learning that dogs, horses, and perhaps many other species are far more emotionally complex than we ever realized," [says] Paul Morris, a psychologist at the University of Portsmouth who studies animal emotions.... "They can suffer simple forms of many emotions we once thought only primates could experience" [Times Online].

In the new study of about 30 dogs, which will be published in the Proceedings of the National Academy of Sciences tomorrow, researchers placed two dogs side by side and then had them alternate performing a trick in which each placed its paw in a researcher's hand. The two dogs happily complied when both received a treat for a successful trick, as well as when neither were rewarded. But when only one dog got a sausage snack, the other refused to continue the game, and often even refused to look at the researcher. The disgruntled pups also showed symptoms of stress, like scratching and licking themselves. Says Range:

"Animals react to inequity.... To avoid stress, we should try to avoid treating them differently." ... Range said she wasn't surprised at the dogs reaction, since wolves are known to cooperate with one another and appear to be sensitive to each other. Modern dogs are descended from wolves [AP].

Range next plans to conduct similar experiments on wolves to see if they get jealous, too. Related Content: DISCOVER: Exactly How Smart is Man's Best Friend? 80beats: One Giant Leap for Birdkind: A Magpie Looks in the Mirror and Recognizes ItselfImage: Friederike Range