Does The Motor Cortex Inhibit Movement?

A new paper could prompt a rethink of a basic tenet of neuroscience. It is widely believed that the motor cortex, a region of the cerebral cortex, is responsible for producing movements, by sending instructions to other brain regions and ultimately to the spinal cord. But according to neuroscientists Christian Laut Ebbesen and colleagues, the truth may be the opposite: the motor cortex may equally well suppress movements.

Ebbesen et al. studied the vibrissa motor cortex (VMC) of the rat, an area which is known to be involved in the movement of the whiskers. First, they determined that neurons within the VMC are more active during periods when the rat’s whiskers are resting: for instance, like this: 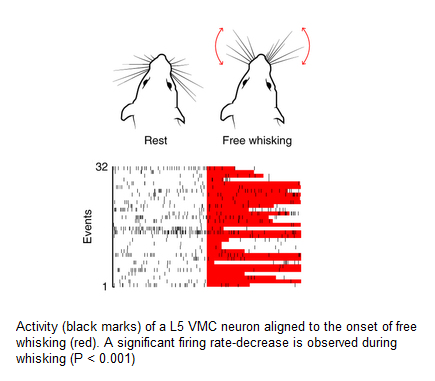 The existence of cells whose firing negatively correlates with movement is interesting, but by itself it doesn’t prove that much. Maybe those cells are just doing something else than controlling movement? However, Ebbesen et al. went on to show that electrical stimulation of the VMC caused whiskers to stop moving, while applying a drug (lidocaine) to suppress VMC activity caused the rat’s whiskers to whisk harder.

Ebbesen et al. go on to say that the inhibitory role of VMC may extend to other regions of the rat motor cortex, and to other movements beyond the whiskers:

Rats can perform long sequences of skilled, learned motor behaviors after motor cortex ablation, but motor cortex is required for them to learn a task of behavioral inhibition (they must learn to postpone lever presses)35. When swimming, intact rats hold their forelimbs still and swim with only their hindlimbs. After forelimb motor cortex lesions, however, rats swim with their forelimbs also36.

Yet what about in humans? Ebbesen et al. note that there “has historically been a strong bias toward the study of positive motor effects” of motor cortex stimulation in humans, and they acknowledge that there is clear evidence of direct, excitatory connections from neurons in the hand areas of the primate motor cortex to the spinal cord. Yet they say that there is also plenty of evidence of inhibitory function in the human motor cortex:

Human patients report an inability to move as a prominent effect of intraoperative stimulation of motor cortex18, 38, 39. The existence of these negative motor areas in M1, where stimulation elicits an inhibition of movement, is a robust result… although some muscle weakness is a symptom in patients with M1 or pyramidal tract lesions, the prominent symptoms are ataxia (loss of control over movements), spasticity, clonus and hyperexcitability of reflexes50.

Overall, this paper provides an intriguing reminder that the motor cortex is, at the very least, responsible for suppressing movements as well as stimulating them. But this raises the question: if the cortex is the ‘brake’, where then is the accelerator? I asked Christian Ebbesen this. His reply:

Rats can still whisk with no VMC at all and a subcortical pattern generator for whisking has recently been identified. Presumably, whisking is often initiated in the brainstem in response to sensory input or arousal. A major role of motor cortex might be to “orchestrate” this subcortical repertoire of movements… The big surprise of our study is that this cortical “selection” of motor output from a subcortical repertoire seems to work by suppressing rather than initiating movements.

Seminal neuroscience classics (e.g. the case of Phineas Gage) emphasized a function of the frontal lobes in inhibiting unwanted behavior, but the study of motor cortex – a large frontal area – has not been focused on this vital aspect of motor control. In a very broad sense, our observations suggest that the function of rodent motor cortex is not simply to generate movement, but also to select and stop wrong movements.