Another prominent psychology theory has come under scrutiny by researchers who say the published results look unrealistic. In a new paper, Miguel A. Vadillo et al. take aim at the idea that the body's reserves of willpower rely on glucose. The background here is the 'ego depletion' model, a psychological theory which holds that self-control is effortful and draws on a limited resource, which can eventually be depleted if it's overused. Many researchers have proposed that glucose is this resource. Numerous studies have shown that a sugary drink restores the depleted ego, boosting performance on self-control measures. But Vadillo et al. say that publication bias and/or p-hacking is prevalent in this literature, calling the results into question. The authors present a p-curve analysis of the published glucose-boosts-willpower literature (including 19 papers in all) showing that it is highly unlikely to be free of bias: 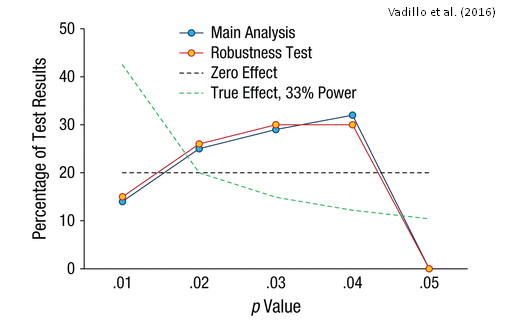 The p-curve is a technique which plots the density of p-values below the significance threshold of 0.05. If there is a real effect (i.e. if glucose does boost the ego), the p-values should be clustered around 0, i.e. there should be a peak on the left side of the p-curve. However, in the case of the glucose literature, the peak is at 0.04, just barely significant, which is unlikely to occur when there is a real effect, even a small one. The observed p-curve is consistent with the theory that the positive results are just chance findings which were selectively reported in the published literature. Such selective reporting is not unique to this literature, mind you, but is rather a near universal problem in all science which uses p-values, as I've decried many times. Overall, this doesn't look good for the glucose-ego theory. That said, the p-curve is a relatively new technique, and has not yet gained universal acceptance as a way of detecting bias. I wonder what the creators of the p-curve, Simonsohn, Simmons and Nielson, think of this paper?