Does Evidence Support the Artistic vs. Scientific Mind Stereotype? 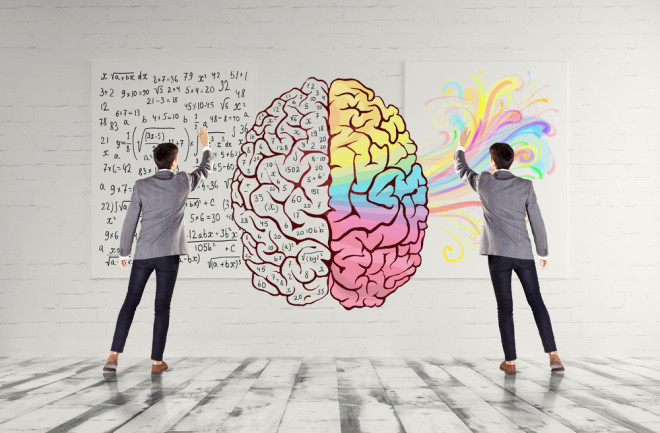 It’s a stereotype, but many of us have made the assumption that scientists are a bit rigid and less artistic than others. Artists, on the other hand, are often seen as being less rational than the rest of us. Sometimes described as the left side of the brain versus the right side – or simply logical thinking versus artistic creativity – the two are often seen as polar opposites.

Neuroscience has already shown that everyone uses both sides of the brain when performing any task. And while certain patterns of brain activity have sometimes been linked to artistic or logical thinking, it doesn’t really explain who is good at what – and why. That’s because the exact interplay of nature and nurture is notoriously difficult to tease out. But if we put the brain aside for a while and just focus on documented ability, is there any evidence to support the logic versus art stereotype?

Psychological research has approached this question by distinguishing between two styles of thinking: convergent and divergent. The emphasis in convergent thinking is on analytical and deductive reasoning, such as that measured in IQ tests. Divergent thinking, however, is more spontaneous and free-flowing. It focuses on novelty and is measured by tasks requiring us to generate multiple solutions for a problem. An example may be thinking of new, innovative uses for familiar objects.

Studies conducted during the 1960s suggested that convergent thinkers were more likely to be good at science subjects at school. Divergent thinking was shown to be more common in the arts and humanities.

However, we are increasingly learning that convergent and divergent thinking styles need not be mutually exclusive. In 2011, researchers assessed 116 final-year UK arts and science undergraduates on measures of convergent and divergent thinking and creative problem solving. The study found no difference in ability between the arts and science groups on any of these measures. Another study reported no significant difference in measures of divergent thinking between arts, natural science and social science undergraduates. Both arts and natural sciences students, however, rated themselves as being more creative than social sciences students did.

Going With the Flow

Studies have actually revealed considerable overlap in the cognitive processes supporting both scientific and artistic creativity. The psychological concept of “flow”, pioneered by Mihály Csíkszentmihályi in the 1990s, describes a state of consciousness where one is completely absorbed and energised while performing an activity. Flow experience has been strongly linked to peak performance in many artistic and creative domains.

These two may have more in common than you might think. (Credit: Anton_Ivanov/shutterstock)

Research in my own group has investigated flow during visual creativity, finding that the experience can be increased by a positive mood. We also found that people who experienced flow were more likely to rate their own productions as being creative. However, flow is not restricted to artistic pursuits. It can also be experienced during activities focused on science. One study asked junior scientists to collaborate on dictating a research article and half of those participating reported that they experienced flow-like states during the dictation process.

There is also substantial overlap in the use of visualisation and mental imagery during scientific and artistic thinking. Great scientists such as Albert Einstein, Michael Faraday and Nikola Tesla all reported that they used mental imagery when describing their thought processes. Studies have also found that mental imagery plays a central role during the construction and evaluation of many scientific “thought experiments”, in which a scientist mentally assesses the implications of a particular hypothesis.

The Power of Stereotyping

Convergent and divergent thinking abilities aren’t necessarily innate. A recent study on creative stereotypes asked individuals to complete a divergent thinking task while adopting the perspective of either an “eccentric poet” or a “rigid librarian”.

Despite such preconceptions of the ways in which logical and unstructured thinking styles are related to creativity, it is not difficult to find examples of individuals who do not fit the stereotype. Albert Einstein was a keen musician who enjoyed playing the piano and violin while Nobel Prize-winner Richard Fenyman worked as an artist using the pseudonym “Ofey”. Musicians Brian May, Brian Cox and Greg Graffin all completed science PhDs.

Case studies of scientists engaging in art and vice versa are often presented as being unusual. However, psychologists recently conducted a comprehensive review of the extent to which Nobel Prize winners in the sciences, members of the Royal Society and US National Academy of Sciences, and members of the US public reported engaging in arts and crafts-based pursuits. They found that members of the Royal Society and National Academy of Sciences were almost twice as likely to report engaging in arts and crafts pursuits as the general public. Eminent Nobel laureate scientists were almost three times more likely to report such activities.

These findings clearly show that the stereotypical view that scientists and other logical thinkers are less likely to be artistic or creative fall wide of the mark. As Einstein himself noted: “The greatest scientists are artists as well”.