Do Rats Have Free Will?

New research on the neural basis of 'spontaneous' actions in rats could shed light on the philosophical mystery that is human 'free will'. The study, just published in Nature Neuroscience, is called Neural antecedents of self-initiated actions in secondary motor cortex. It's from researchers Masayoshi Murakami and colleagues of Portugal's excellently-named Champalimaud Centre for the Unknown. The senior author is Zach Mainen, whom I interviewed recently after he helped organize the campaign for reform of Europe's Human Brain Project. Murakami et al. trained rats to perform a task requiring patience. In each trial, the rat heard a sound and had to wait in place until a second sound occured. If they waited, they got a large amount of water as a reward. If they moved to get some water too soon, however, they only got a small amount. Using tiny electrodes implanted in the premotor cortex of the rats' brains, Murakami et al. discovered that some neurons seemed to act as "integrators" (or counters) - over the course of the waiting period, their firing activity gradually increased. If activity reached a certain threshold before the second sound played, the rat would stop waiting and 'spontaneously' decide to go for the small reward. These "integrator" neurons didn't always count at the same speed, however. On some trials, they 'ramped up' more quickly - and when this happened, the rat was more impatient. This image shows the relationship between ramp up rates and waiting time - 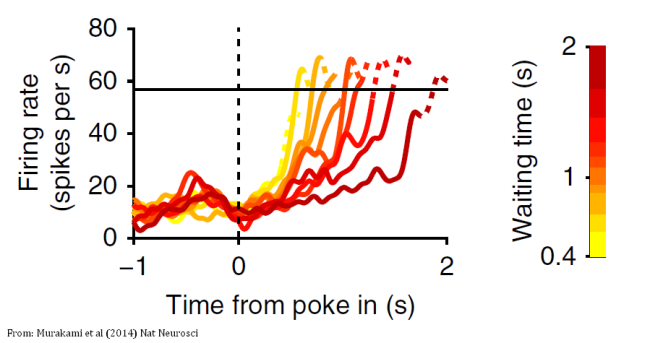 Why did the integrators sometimes count faster than other times? Murakami et al. found a second class of neurons, whose rate of firing (which varied seemingly at random) predicted the rate at which the integrators "counted up". The authors suggest, therefore, that these latter neurons provide inputs to the neural integrators. When the total amount of input reaches a threshold, a 'spontaneous' action is triggered. What does this have to do with free will? Well, it all goes back to 1983, when a neuroscientist called Benjamin Libet found, using EEG, that a certain pattern of brain activity - a "readiness potential" - occurs in the human brain just before 'spontaneous' actions. In fact, this brain event happens even before we are aware of deciding to act. Libet's much-discussed finding has been seen as evidence against free will because it seems to suggest that 'the brain decides to act before we do'. But what if the readiness potential is somehow the equivalent of the rat "integrator"? That would be a big deal, say Murakami et al. In this case,

activity preceding bound crossing, either input or accumulated activity, could be said to participate causally in the timing of an action, but does not uniquely specify it. The integration-to-bound theory implies that no decision has been made until the bound has been reached... as at any moment up to bound crossing, the arrival of opposing inputs may avert an action.

In other words, maybe the readiness potential is not a consequence of a decision that has already been made, but rather is a contributor to a decision that only happens later. This is in fact not a new idea. I blogged about this kind of interpretation of the Libet experiment last year, and integrate-to-bound models are quite common in neuroscience (e.g.). However Murakami et al. say that they're the first researchers to find direct evidence for this model in decision making. They conclude that the integrator threshold might even reflect the boundary between unconscious and conscious neural processes:

Crossing the threshold from unawareness to awareness [could be] a reflection of bound crossing [in the integrator]. In this way, the integration-to-bound theory may help to resolve the contradiction between the subjective report of free will and the requirement for causal antecedents to non-capricious, willed actions. ...our results provide a starting point for investigating mechanisms underlying concepts such as self, will and intention to act, which might be conserved among mammalian species.