Researchers can't yet untangle how exactly substances like MDMA and psilocybin affect the brain, and some are working to take the tripping out of treatment. 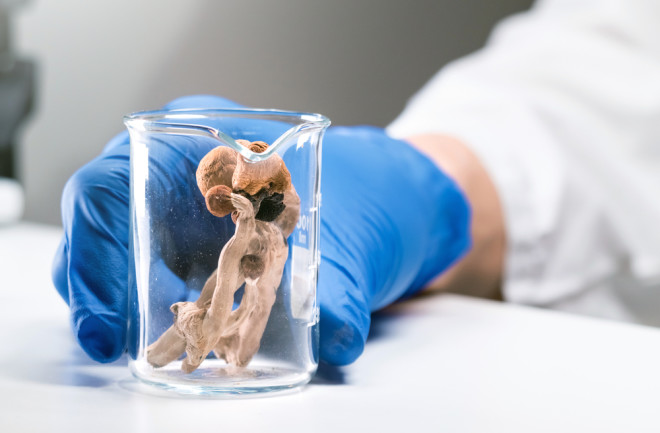 When seeking a treatment for a pathology or disorder, medical researchers typically look for an effective substance that is neither toxic nor addictive. Things get even more complicated when trying to treat an aspect of one’s consciousness.

But after decades of stigmatization and criminalization, a number of psychoactive substances, including MDMA, psilocybin, LSD and ketamine, have shown significant therapeutic benefits in clinical trials to address post traumatic stress disorder (PTSD), depression and alcoholism, along with end-of-life anxiety in cancer patients.

The controlled use of these substances, coupled with therapy sessions led by trained guides, are set to become a legitimate treatment alternative. Top U.S. academic institutions have already set up psychedelic research centers, with Johns Hopkins, Stanford, Yale and Berkeley investing heavily into this new line of research.

But an important question remains unanswered: Must someone undergo a psychedelic or hallucinogenic experience to get the therapeutic utility from these drugs?

Non-psychoactive derivatives of these substances may be particularly beneficial. After all, anecdotal evidence suggests psychedelics can induce a state of psychosis among people with mental illnesses such as schizophrenia (this population has therefore been omitted from clinical trials), or those who have a history of psychosis in their families.

Not all research supports this hazard, but it may be of particular concern because individuals with such conditions are the likely recipients of these drugs in clinical settings. While psychiatrists can identify certain risk factors that might make people more susceptible to this negative side effect, a particularly powerful psychoactive drug may still present risks.

There is also a desire to minimize the potential for abuse. Although psychedelics lack some of the addictive properties of other substances, MDMA (notably an amphetamine derivative) may carry this risk. It is important to note, however, that people can also misuse selective serotonin reuptake inhibitor (SSRI) antidepressants such as Prozac, which are often taken on a daily basis. Conversely, psychoactive drug therapy sessions take place once every three to six months and end if the patient has fully recovered.

What’s more, it’s difficult to conduct rigorous clinical trials with placebos to test the comparative efficacy of these drugs because they alter the participants’ conscious state. In this sense, it’s nearly impossible to have an unbiased sample of study participants if they know they have taken psychoactive substances, as people tend to have strong feelings about the therapeutic nature of these substances (whether for or against).

Research into the production and testing of non-psychoactive alternatives to these drugs is well underway. At the University of California, Davis, chemical neuroscientist David E. Olson is studying a type of neuroplasticity, or the creation of new neural pathways, in the prefrontal cortex that he believes aids treatment of certain conditions like PTSD, depression and addiction. Olson’s lab is developing drugs that they believe stimulate such growth without the hallucinogenic effects associated with psychoactive substances.

Overall, researchers developing non-psychoactive derivatives of drugs like psilocybin, LSD, MDMA and ketamine hope the underlying neural dynamics promoted by these substances are actually responsible for the therapeutic benefits that they have shown in clinical trials.

There is much to learn regarding the precise effects these drugs have on the brain. But neuroscientists do know that psychedelics impact the serotonin system, reduce connectivity within the default mode network (a group of brain regions that contribute to repeating thought patterns), and can stimulate the creation of new neural pathways — encouraging regions of the brain that usually don’t communicate with one another to do so.

Some research suggests that the receptive state induced by these drugs, coupled with guided therapy, may be necessary to produce therapeutic outcomes. For example, subjects in a recent Addiction Biology study who received micro-doses of LSD showed no signs of improved mood nor cognitive function. This outcome may be explained by the absence of a notable "high" feeling among the participants.

Mary Cosimano, the director of Guide/Facilitator Services at Johns Hopkins University, has conducted over 450 psychedelic assisted therapy sessions. She certainly gives the impression that the conscious state induced in patients is a crucial ingredient in treatment.

Before guided psilocybin therapy sessions, Cosimano works to establish a sense of trust with participants so that they can feel comfortable divulging their stories.

“Once they have opened up and shared, they are much more likely to let go and progress though their psilocybin experiences, managing difficult moments with more ease, and eventually restoring their deep and intrinsic connection to their true selves,” Cosimano told the Multidisciplinary Association for Psychedelic Studies.

In her TED talk, Cosimano notes how the “psilocybin experience offers a means to reconnect to the present, our true nature, our authentic self, to love.”

The benefits may not stop after one's sessions conclude: Follow-up studies into the research conducted by Cosimano and her colleagues suggest that the therapeutic effects of psychedelic-assisted therapies can persist for at least a year.

Despite current work on non-psychoactive options, psychedelics' ability to alter consciousness in a unique way could explain the therapeutic outcomes reported so far. Ultimately, they may be most valuable for producing a mental state that makes therapy more effective.