Do Bilingual People Have a Cognitive Advantage? 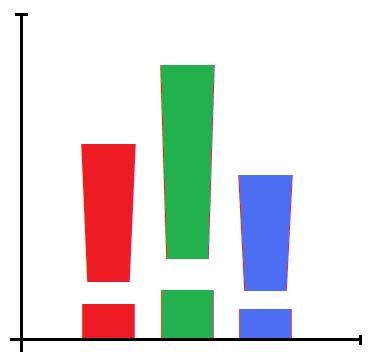 For years, psychologists have been debating the "bilingual advantage" - the idea that speaking more than one language fluently brings with it cognitive benefits. Believers and skeptics in the theory have been trading blows for a while, but matters recently came to a head in the form of a series of papers in the journal Cortex. The bilingual advantage hypothesis states that bilinguals excel at 'cognitive control' also known as 'executive function' - meaning that they find it easier to suppress "reflex" responses and focus on the task at hand. The theory is that whenever they're speaking or listening to one language, the brains of bilinguals have to use cognitive control to actively suppress the other language, to avoid getting mixed up. Because they're constantly practicing cognitive control, bilinguals are better at it - so the theory goes. Psychologists Kenneth Paap, Hunter A. Johnson and Oliver Sawi aren't convinced however. They set off the Cortex debate with a paper concluding that "bilingual advantages in executive functioning either do not exist, or are restricted to very specific and undetermined circumstances." In this paper, Paap et al. discussed issues such as flawed study designs and publication bias. Their key point, however, was simply that the large majority of studies that have looked for the bilingual advantage just haven't found it. The bulk of the published results - 83% of them in fact - are negative, Paap et al. said. Worse, the largest (and hence most reliable) studies have been uniformly negative. The 17% of positive results tended to come from smaller experiments: 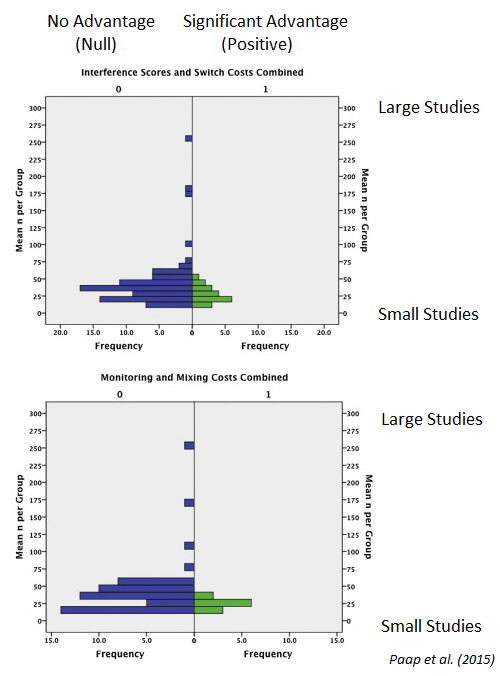 Paap et al.'s critique was followed by 21 comments from other bilingualism researchers, following which Paap et al. responded to the responses with a summing-up article. This summary makes for rather depressing reading. In it, Paap et al. say that leading proponents of the bilingual advantage hypothesis were invited to contribute to the debate, but many declined:

The sounds of silence emanating from the missing commentaries resonate with Morton's (2015) point that one reason for the lack of progress in resolving inconsistencies in the literature is that "dissenting opinions are simply dismissed" as proponents of the bilingual advantage hypothesis "march on ignoring all appeals for higher standards".

In response to a critical comment pointing out that a meta-analysis of the published studies finds a small, but statistically significant, bilingual advantage (in other words, those 17% of positive results count for something), Paap et al. say that evidence for publication bias in the dataset makes even this small effect suspect:

Woumans and Duyck (2015) state that a solid meta-analysis is the best synthesis of an effect and that de Bruin et al. (2015) reported a significant bilingual advantage across studies [but if] the intent is to say that a significant finding is "solid" even in the presence of strong evidence that the sample is biased, then we disagree.

What are we to make of all this? Neuroskeptic readers will be familiar with psychology theories coming under critical scrutiny. Last month, for instance, I covered the case of "romantic priming". The situation is bit different this time, however. With "romantic priming", the vast majority of published studies support the existence of the phenomenon. The critics said that the literature is too consistent - suggesting (extreme) publication bias. With the bilingual advantage, it's the opposite problem: the effect isn't consistent enough. One might be forgiven for feeling that the odds are stacked against theories these days. It seems like if there's not enough evidence for your claim, people won't believe it, but if there's lots of evidence, no-one will believe it either. In truth, I think what this "Catch 22" reveals is a growing lack of confidence in the published literature in the field, and specifically in the publication process which incentivizes publication bias and p-hacking. It's the spectre of these biases that makes people skeptical of "too much" evidence. I don't think it will be easy to restore confidence in the current system. Rather, I think we need a new way to communicate scientific results. As I've written before, I see preregistration as the solution to this problem. In my view, if bilingual advantage theorists want to prove that their hypothesis is true, they need to set up a large, fully preregistered study and make all of the data open once it's finished. Even better, they could involve their opponents in the process and make it an adversarial collaboration - something I've recommended before as a way to resolve these kinds of controversies. (Some of the Cortex commentaries on Paap et al.'s paper suggest that too.) Just publishing more of the usual studies won't help.