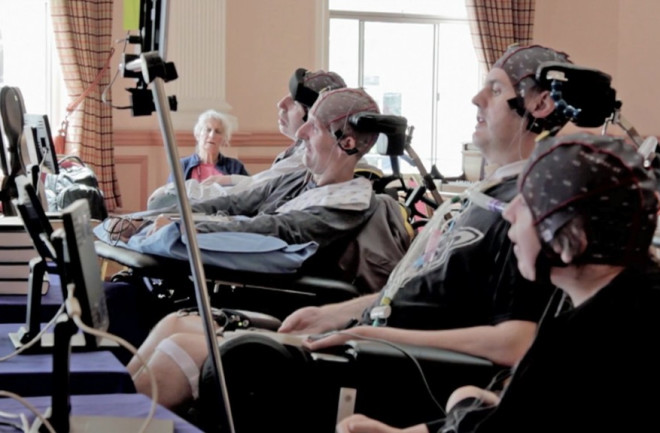 The members of the Paramusical Ensemble as they compose their piece "Activating Memory." (PACMF-15/Vimeo) A piece of music, composed in a fashion like no other before it, will be played later this month at the Peninsula Arts Contemporary Music Festival in the United Kingdom. The piece, entitled "Activating Memory," is the result of a decade-long project by researchers at Plymouth University and the Royal Hospital for Neuro-disability. Four musicians, who are unable to speak or walk, used electrical signals from their brain to select musical passages while musicians played their selections in real-time. The researchers' brain-computer interface allowed the quartet to express their musical creativity without singing or picking up an instrument.

Professors Eduardo Reck Miranda and Joel Eaton created a Brain-Computer Music Interface that combines an electroencephalogram (EEG) with a computer to measure brain activity in the visual cortex. The computer displays four musical sequence options, and each option has a corresponding matrix of flashing lights. The four musicians choose the desired sequence by concentrating on the light matrix that corresponds to their choice. The choice is then sent to another musician who physically plays the part. The members of the ensemble could even modulate the volume by changing the intensity of their concentration. "One of the key things about this system is that not only does it give a user the interaction or the control of an instrument, it allows them to interact with each other. Through this technology, they can all get involved at the same time with something musical," said Dr. Julian O'Kelly, Research Fellow in Musical Therapy at the Royal Hospital for Neuro-disability in the accompanying video. [embed]https://vimeo.com/150672397[/embed]

Peering Inside the Brain

Each musician in the Paramusical Ensemble wears a cap wired with electrodes, including one that sits above the visual cortex. When an image is held in the brain, the visual cortex produces a unique electrical pattern that the Brain-Computer Music Interface System identifies. By concentrating exclusively on the marker accompanying the piece of music they wish to play, the EEG can read and translate their brain activity into commands. The piece was composed by Miranda and performed for the first time last July with help from the Bergerson string quartet, who provided the physical instrumentation. Members of the Paramusical Ensemble select from short passages from Miranda's piece, and assembled them into a cohesive whole.

Rosemary Johnson, a member of the Paramusical Ensemble and former violinist with the Welsh National Opera Orchestra, was crippled in an automobile accident 27 years ago. The injuries from that incident robbed her of movement. Now, with a new way to transmit her thoughts, she can express herself musically once again. "The first time we tried with Rosemary we were in tears. We could feel the joy coming from her at being able to make music," said Miranda in a recent interview with the Telegraph. "It was perfect because she can read music very well and make a very informed choice."