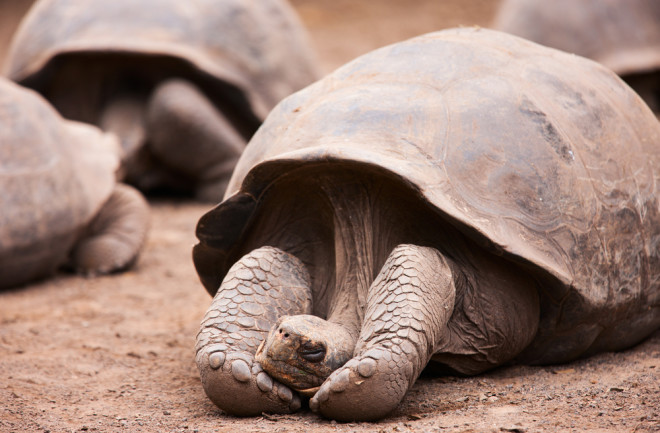 This isn't Diego, it's another species of Galapagos tortoise, but we imagine this is how he feels. (Credit: Shutterstock) It's a tough job, but someone has to do it. Diego, a 100 year-old Galapagos giant tortoise that was one of the last of his species, has played an outsize role helping the population rebound. A recent genetic analysis of the giant tortoise population on an island in the Galapagos concluded that some 40 percent of the tortoises living there are descended from Diego. Since the 1970s, the 100-year-old stud has fathered some 800 offspring. Of course, half the credit belongs to the six females that share his enclosure as part of the captive breeding program on Santa Cruz island.

While his species, Chelonoidos hoodensis, once numbered only 14, Diego's prolific sex life has helped bring them back from the brink. He has proved a tireless breeder, and there are currently around 2,000 tortoises roaming their ancestral home, Española. Two other males are currently held at the breeding facility as well, but they don't seem to possess the same libido, according to the AFPvia Yahoo.

Galapagos tortoises lay anywhere from 1 to 4 clutches of eggs every year, and each clutch can have up to 25 eggs in it. Even assuming multiple children per birth, it takes a lot of work to get to 800. The giant tortoises aren't out of the woods yet, as their population still numbers less than half of what it used to. Pirates who frequented the islands in the 18th century nearly wiped out the giant tortoise population. Three species of tortoise are now extinct, including one whose last member, Lonesome George, refused to mate. Diego's offspring are also being introduced to nearby Santa Fe island, where a different species of tortoise died out over a century ago.

Not Every Tortoise is a Diego

Getting captive animals to mate can actually be fairly difficult. Cheetahs, rhinos, elephants, pandas and many other species

at his side. Diego, whether out of a sense of duty or just plain sexual appetite, has no such problems spreading his seed. He began doing his duty for his species in 1976, when he was brought back to the Galapagos after a stint at the San Diego Zoo. He was likely taken from Española sometime between 1900 and 1959.