Did A Soviet Psychiatrist Discover Autism In 1925?

Who discovered autism? Traditionally, the priority has been ascribed to two psychiatrists, Leo Kanner and Hans Asperger, who both published independent but remarkably similar descriptions of the syndrome in 1943 - 44 (although Asperger had released a preliminary description in 1938.) 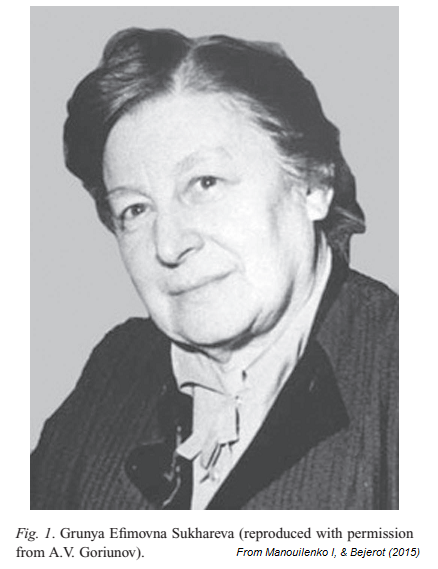 a new paper in the Nordic Journal of Psychiatry

, both Kanner and Asperger were scooped by nearly two decades - by a Soviet child psychiatrist, Grunya Efimovna Sukhareva. She described a syndrome with striking resemblances to what was later called 'autism' - although Sukhareva never used that particular word. She first published in Russian in 1925, and then in German in 1926. Sukhareva's paper was a case report on six boys who she had treated at the Psychoneurological Department for Children in Moscow. She called the boys' syndrome schizoiden Psychopathien (schizoid psychopathy) and the symptoms were remarkably consistent with those of Kanner's and (especially) Asperger's later descriptions. According to Sukhareva, schizoid psychopathy was characterized by "lack of facial expressiveness", isolation and lack of social interaction, and odd and socially inappropriate behavior. They also had a "tendency towards automatism": stereotypic behaviors and speech, obsessive interests, disliking interruptions, and wanting things to always happen in the same way. She also held that these children had normal or superior intelligence, were sensitive to noise and smell, and were sometimes musically gifted. This could almost serve as a modern description of autism. So did Kanner or Asperger know of

Sukhareva's work? It is possible that they did, as they were both natives of Austria and native German speakers. However, there's no direct evidence that either of them were aware of Sukhareva's work. If they were, they failed to give her credit. (EDIT: Michelle Dawson pointed out on Twitter that this is incorrect. Leo Kanner actually cited Sukhareva in a 1949 paper. The new paper overlooks this.)

Sukhareva was born in Kiev (then part of the Russian Empire, now Ukraine) in 1891. She graduated in medicine in 1915, and went on to have a long career in child psychiatry. She worked in Moscow until she retired in 1969, having been awarded the title of Honored Scientist of the Russian Soviet Federative Socialist Republic. She died in Moscow in 1981. The authors of the new paper say that:

Being Jewish, a citizen of the Soviet Union and publishing in German and Russian, in addition to being a woman, may at the time not have been a successful formula for achieving international acclaim. However, Sukhareva is remembered locally; a commemorative article was recently published in Russian in honor of the 120th anniversary of her birth, but she deserves a wider recognition for her work.