Ketamine: club drug, 'horse-tranquillizer', and... miracle antidepressant? I've blogged about the research behind the claim that ketamine has rapid-acting antidepressant effects severaltimes. Since 2009, my view has been that it is impossible to tell whether ketamine has specific antidepressant properties, because ketamine has never been compared against an 'active placebo' control. In trials, patients given ketamine report feeling better than patients given no drug. But these trials weren't really double-blind, because ketamine is psychoactive: it causes hallucinations and other subjective effects. Patients feeling these effects will have known that they had got the real drug, not the inactive control, potentially leading to a greater placebo effect. I've also speculated that experiencing the consciousness-altering effects of a psychoactive drug could help depressed people through psychological mechanisms - for example, by giving patients hope that it is possible for them to feel better. Now, in October last year, James Murrough and colleagues of New York revealed the first published data comparing ketamine to an 'active control'. They reported that ketamine was more effective. I didn't blog about it at the time, but this week a very interesting paper appeared in

and taken together, they make quite a story. Murrough et al compared ketamine (dose: 0.5 mg/kg) to midazolam. In a 'double-blind', randomized, between-subjects trial, ketamine was substantially more effective than midazolam at relieving major depression. Here's the symptom ratings on the MADRS scale: 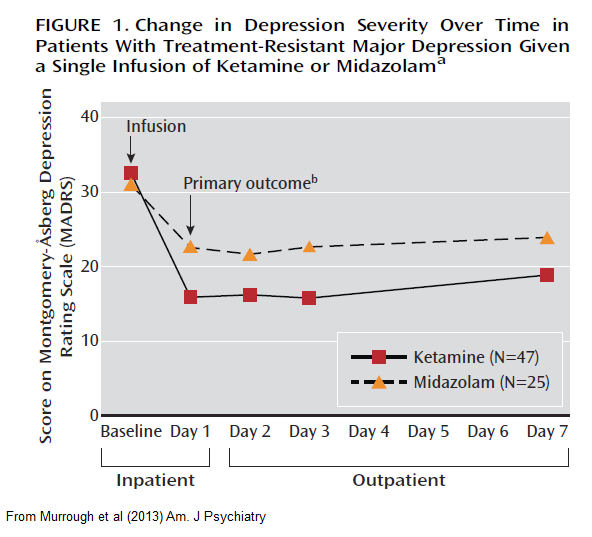 The difference between the two drugs was certainly statistically significant. But what does it signify? To answer this question, we need to look more closely at the 'active control', midazolam. Midazolam is a benzodiazepine, much like Valium (diazepam) but with a shorter duration of action. Like all benzodiazepines, it's a sedative, anxiolytic and, at higher doses, an anaesthetic. Oh, and it's made the headlines lately for getting drafted in as a component of American lethal injections because the executioners had trouble sourcing other sedatives. How does that place it as an active control for ketamine? How do the contenders match up? 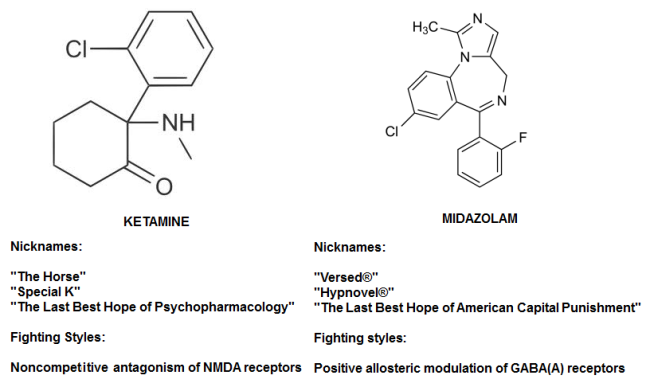 Not very well, in my opinion. That's not just my opinion after seeing the results of the Murrough trial (although, as we'll see, the results confirm that.) Two years ago I warned that:

An active comparator has to “make an impression” on the patient equal to that produced by the real drug... Would a benzodiazepine make as big an impression as 0.5 mg/kg ketamine? It’s impossible to predict, really; so we’d need to ask people about the subjective strength of the drug effect. Personally, I worry that a lot of people just get sleepy on benzodiazepines and don’t really feel much...

So why use midazolam? Murrough et al's justification is that both ketamine and midazolam are used in anaesthesia. But this is not very meaningful. Ketamine is popular among the dance music community not because it's an anaesthetic at high doses, but because it's hallucinogenic at the moderate doses that people take. Midazolam isn't. Murrough and colleagues do not appear to have compared the subjective impact of the drugs in any systematic way, using questionnaires. Asking patients (and the attending researchers) whether they could tell which drug they'd been given (checking the blind) would also have helped. So lacking a direct measure of psychoactivity, the best we can do is look at the side effects. Out of 26 side effects measured, 18 were more common in the ketamine group. More people on midazolam experienced 2, and for 6 there was no difference. Of these, the most 'psychoactive' effects were poor concentration (ketamine 26%, midazolam 8%), restlessness (ketamine 21%, midazolam 20%) and anxiety (ketamine 15% midazolam 0%). We're also told that 17% of the ketamine group experienced 'significant dissociative [consciousness-altering] symptoms'; no such effects are mentioned for the midazolam group. In sum, we don't know how much of a subjective impact these two drugs made, however it seems very plausible that ketamine made a greater impression. The Murrough et al paper is therefore a missed opportunity, which doesn't answer the big question: are the antidepressant effects of ketamine separable from its psychoactive effects? Bummer. But it's doubly disappointing because it could so easily have been different. That Dakwar et al paper I mentioned was much more sophisticated. The title gets right to the point: "Therapeutic infusions of ketamine: Do the psychoactive effects matter?". Dakwar et al took 8 crack cocaine addicts who wanted to go clean. They gave them three injections (in a random order, within-subjects). These were ketamine 0.41 mg/kg, ketamine 0.71 mg/kg, and lorazepam 2 mg. The ketamine doses are, respectively, slightly lower than, and substantially higher than, the dose used in depression studies (0.5 mg/kg). Lorazepam is similar to midazolam but with a longer duration. The goal was to see whether ketamine increased the 'motivation to quit' crack. But Dakwar et al also used questionnaires to formally assess the psychoactive effects. The key finding was that both doses of ketamine caused much stronger 'mystical experiences' than lorazepam, as measured with the HMS scale. Participants reported feeling "a new view of reality", "incapable of being expressed in words", "a feeling of awe"... pretty impressive, basically. 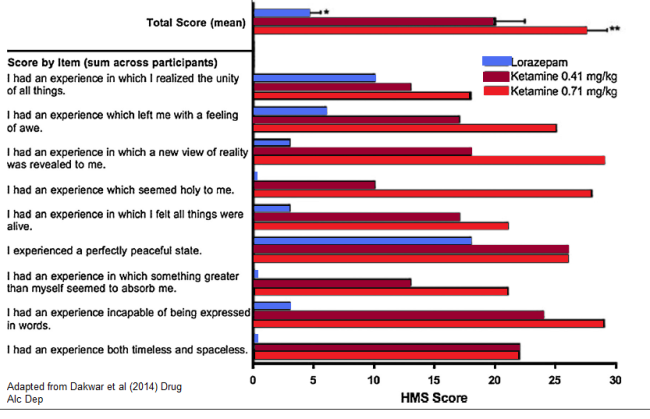 Furthermore, there was a strong correlation between the intensity of the injection-induced mystical experience, and subsequent motivation to quit. This is consistent with (although not proof of) the idea that the clinical effect of ketamine in addiction is an indirect effect of its psychoactive properties, rather than a direct pharmacological effect. Of course, this doesn't directly tell us anything about the ketamine in depression question. But it's suggestive and the paper is a good example of how to approach these issues (although it would have been even better to have had an inactive placebo injection as well.) Unfortunately, 'the race goes not to swift' in science these days. Dakwar and colleagues published in the humdrum journal Drug and Alcohol Dependence (Impact Factor: 3.14) while Murrough et al scored a place in the American Journal of Psychiatry (Impact Factor: 14.7). Incidentally, one of the authors of the new study, Sanjay J Mathew, was the senior author on the Murrough et al paper. In summary I think the question is still very much open whether ketamine's antidepressant effects are 'psychological' or 'physiological' in origin. I'm genuinely agnostic on the issue; I would love to know the answer, but at present we don't have it. You might ask - and many commenters on my previous ketamine posts have asked - so what? Isn't the whole psychological-vs.-physiological question dualistic anyway? If ketamine works, it works, right? Does it matter why it works? I think it does matter. For one thing, if ketamine has a 'physiological' antidepressant effect, via its action on glutamate receptors, then that would have major research implications: it would imply that other glutamate drugs might be as effective without the hallucinogenic effects. Drug companies and neuroscientists would have a research agenda mapped out for them (and indeed this is already underway.) If it's a 'psychological' antidepressant, this would be misguided. But it also matters clinically. If ketamine treatment is, in fact, acting as a kind of latter-day psychedelic therapy, that would imply that ensuring a comfortable atmosphere and encouraging positive expectations would be crucial. On this view, the smile on the face of the doctor giving the injection might be as important as the drug in the syringe. Finally, I'd like to mention some mysterious 'loose ends' in these results. In Murrough et al, the midazolam group improved substantially, dropping by about 8 points on the MADRS scale after getting their injection. That's not a huge effect, but it's notable because the inactive placebo groups in previous ketamine trials have not tended to improve at all. Midazolam's effect was also greater than that of 150 mg AZD6765, a non-psychoactive ketamine-like drug, in a prior study. One interpretation of this is that midazolam is a quite good rapid-acting antidepressant. The other interpretation is in terms of the placebo effect: patients taking a given antidepressant are known to report greater improvement if they're in a double-blind trial comparing two different drugs, as opposed to a trial comparing drug to placebo, perhaps because they know that they're getting 'a real treatment' and therefore expect to get better.