Modern neuroscience has been accused of being a ‘new phrenology‘, but now researchers have conducted a modern evaluation of phrenological claims using neuroscience methods.

Notoriously, the phrenologists believed that the shape of an individual’s skull provided clues about their character. The theory was that the brain contained different ‘organs’  which determined different traits. Larger organs exerted a more dominant influence on personality, and organ size could be inferred from head shape because larger organs would push out the skull (early in life) forming “bumps” on the scalp.

Phrenology was wildly popular for much of the 19th century, but later went out of fashion. In recent decades the idea has been nothing more than a historical curiosity. Parker Jones et al. decided that the time has come to seriously test the theory:

We believe it is important for scientists to test ideas, even unfashionable or offensive ones, and not to be content dismissing them out of hand.

So the authors took MRI scans on 5,724 people from the UK Biobank dataset. The scans were processed to calculate the curvature of the scalp at each point – conventionally, neuroscientists use similar algorithms to study the shape of the brain. Here’s what it looked like: 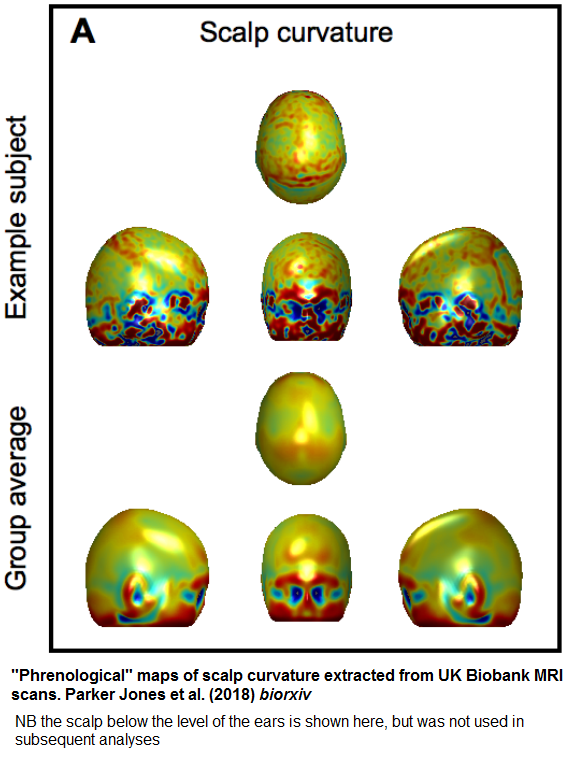 To see if scalp bumps predicted behaviour, the researchers correlated them against the lifestyle and cognitive variables in the Biobank dataset. But to spice things up a bit, and ensure an authentic phrenological feel, Parker Jones et al. first mapped the Biobank variables against the 27 mental “faculties” proposed by Franz Joseph Gall, founder of phrenology.

So, for instance, Gall’s Faculty I was “Impulse to propagation (Amativeness)”, which was, not unreasonably, assigned to the “lifetime sexual partners” variable. Some of the other Faculties, however, were less easy to find proxies for… but Parker Jones et al. did their best: 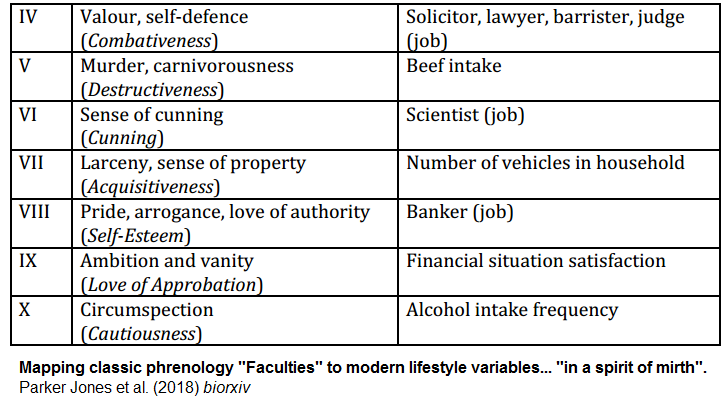 The researchers comment laconically that “All associations were made in a spirit of mirth.” (I wonder if this was a light-hearted Christmas paper that arrived a few days late?)

So what did the researchers find? Absolutely nothing. There were no associations between any ‘faculty’ and scalp curvature. Scalp shape also had no relation to underlying brain shape (gyrification), contrary to phrenological assumptions. Here’s the entirety of Parker Jones et al.’s results section:

Results: We found no statistically significant or meaningful effects for either phrenological analysis.

The present study sought to test in the most exhaustive way currently possible the fundamental claim of phrenology: that measuring the contour of the head provides a reliable method for inferring mental capacities. We found no evidence for this claim.

Regarding the famous ‘phrenological busts’ which depict the locations of the various faculties,

According to our results, a more accurate phrenological bust should be left blank since no regions on the head correlate with any of the faculties that we tested. 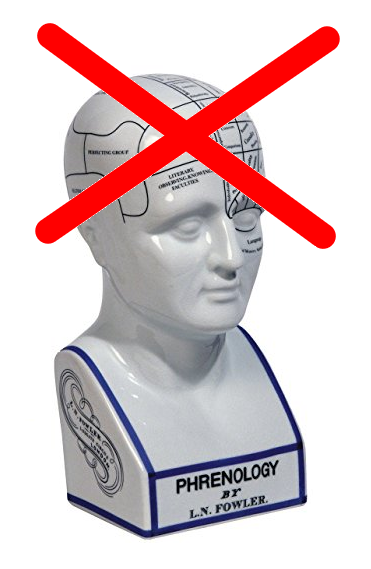 I’m actually rather surprised that there were no significant effects in the “faculty”-scalp analysis. I would have expected there to be racial/ethnic differences in some of the measures, and skull shape does show racial/ethnic variation. (Of course this doesn’t mean that skull shape is somehow the causeof behavioural differences.) The authors controlled for age and sex in their analyses, but they don’t mention controlling for other demographics, like race.