Imagine that someone else was controlling your actions. You would still look like you, and sound like you, but you wouldn't be the one deciding what you did and what you said. Now consider: would anyone notice the difference? In this nightmarish scenario, you would be a "cyranoid" - in the terminology introduced by psychologist Stanley Milgram when he suggested that cyranoids - or at least, an approximation of them - could be a powerful research tool in psychology. Milgram is best known for his obedience experiments in which he convinced (or, perhaps, tricked) dozens of ordinary people to administer agonizing electrical shocks to an innocent victim. In fact, the shocks were faked and no-one got hurt, but the study quickly became infamous. For more about Milgram's obedience project, see here. By contrast, Milgram's cyranoids never got much attention. I'm really surprised that this topic hasn't been more widely discussed because, to my mind, the method and its implications are even creepier than the obedience experiments. Yet the first I heard about them was yesterday, when I read this new paper from British social psychologists Kevin Corti and Alex Gillespie. The authors describe how they replicated two of Milgram's cyranoid experiments. So what is a cyranoid? Milgram named his inventions after the 17th century French playwright Cyrano de Bergerac, whose life formed the subject of a 19th century play of the same name. According to the play, Cyrano was brilliant, but ugly. He succeeded in winning the heart of a woman by teaming up with a handsome but dull man. Cyrano secretly told his colleague what to say - literally putting words in his mouth - and thus created a hybrid personality who was both good-looking and charming. There are plenty of more moderntakes onthe theme. The theatrical Cyrano whispered his instructions into his proxy's ear. Milgram hit upon the idea of reproducing the same effect using modern technology. The 'source' spoke into a microphone and the 'shadower' listened through a hidden earpiece. He or she would simply repeat whatever they heard (with practice, this 'speech shadowing' is, apparently, easier than you'd think.) It's deceptively simple. Milgram claimed that people who meet a cyranoid are unable to detect the trick. As Corti and Gillespie put it

This "cyranic illusion" persisted in cases of extreme identity incongruity between source and shadower, such as when Milgram sourced for 11 and 12-year old child shadowers being interviewed by groups of teachers, none of whom believed, following these interactions, that they had been talking to anything other than an (albeit unusually bright) child.

However, he never published these results, and only referred to them in an anecdotal fashion. So Corti and Gillespie decided to recreate the cyranoid experiment under controlled conditions. They used the following set-up:

The cyranoid contraption consisted of a series of connected devices. The female source spoke into a microphone connected to an FM radio transmitter that relayed to a small radio worn in the pocket of the male shadower. Connected to the radio was a neck-loop induction coil worn under the shadower’s clothing. The male shadower wore a discreet, flesh-colored, wireless, inner-ear audio device (not noticeable at close distances) that received an audio signal from the induction coil. This apparatus allowed the male shadower to hear the words of the female source in real-time.

The shadower sat in an "interaction room" and engaged in a conversation with the "interactant" - a volunteer, who didn't know the nature of the experiment, and who expected to be talking to a normal person. Unbeknownst to the volunteer, the source was observing the conversation from another room, through a video and audio link, and telling the shadower exactly what to say. 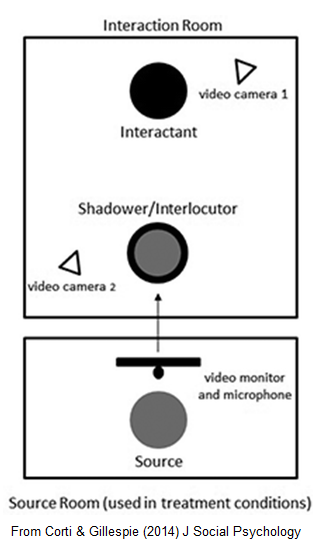 20 volunteers engaged in a 10-minute conversation with the cyranoid. Another 20 were tested in a control condition, in which there was no source, and the shadower was speaking normally. The results indicated that, just as Milgram had said, the cyranic illusion was very convincing:

No participant stated that their interlocutor was behaving unusually or in a pre-prescribed manner during post-interaction interviews and debriefing. Moreover, none of the written evaluations provided by participants in the cyranoid condition gave any indication that the illusion was detected. When the deception was revealed during the debrief session, responses were a positive mixture of astonishment and amusement.

Corti and Gillespie's second experiment was even more dramatic. This time, a 12-year old male actor served as the shadower, while a 37-year old male social psychologist acted as the source. No-one suspected the illusion, although some people suspected that the boy might have been coached on what to say ahead of time. Other participants just thought he was smart:

"Very intelligent. Eloquent and charming. He is obviously very bright and has a very high level of knowledge for his age. He was very polite and well-mannered. He handled a slightly odd social situation very maturely."

It's a truly interesting paper - based on an even more fascinating method. The implications of the cyranic illusion are quite disturbing - but these experiments only scratch the surface. The volunteers in these studies had never met either the shadower or the source before. But what if they had? Would that make the illusion easier to detect? If I started shadowing someone else's speech, would my friends and family notice? I would like to think so. Most of us would like to think so. But how easy would it be? Do we really listen to each others' words, after all, or do we just assume that because person X is speaking, they must be saying the kind of thing that person X likes to say? We're getting into some uncomfortable territory here.