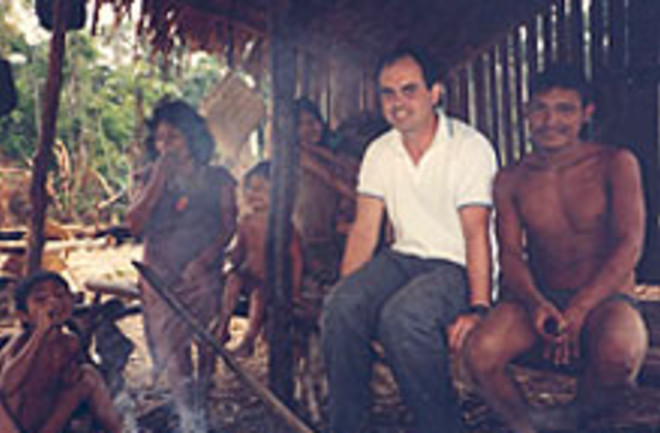 Peter Gordon with members of the Pirãha tribe of Brazil. | Courtesy of Peter Gordon

In the mid-1950s, one of the vanguard theories in linguistics was Benjamin Lee Whorf’s hypothesis that language greatly influences, or even determines, thought. While most linguists have since dismissed this notion, Peter Gordon of Teachers College at Columbia University is giving it another look. He recently studied an isolated 200-person tribe called the Pirãha in the Amazon region of Brazil, whose language is so restrictive, its only numerical words are translations of “one,” “two,” and “many.”

Gordon ran some tribe members through a series of tests that required them to compare small amounts of objects and duplicate groups of AA batteries and nuts. He found that the community could not count or discern the number of objects above three. Previous studies have shown that many animals and even babies have an innate sense of “three,” which could imply that a requirement for understanding the concept of “four” and above is the language for it. “Is it the language,” Gordon asks, “or the lack of practice in doing it?” But he adds, “You can’t really have a number system if you don’t have the number words.”

Other researchers, however, have conducted math studies with a larger tribe and their results oppose Gordon’s work. French linguist Pierre Pica and neuroscience and mathematics expert Stanislas Dehaene designed computer tests for the Mundurukú villagers, who only have words for numbers up to five. The scientists found that these Amazonians were surprisingly adept at estimating the totals or differences in comparing sets of up to 80 objects, doing almost as well as a control group of French speakers. Although the villagers could not succeed in exact calculations, the researchers say their work suggests that a rough number sense is inherent in all humans. “It shows very clearly that they have the rudiments of arithmetic,” says Dehaene. “I would tend to think that this is part of the endowment of humanity and of many animals.”