One of the most energetic phenomena observed (to date anyway) are gamma ray bursts or GRBs. As the name implies, GRBs are brief, but super intense, pulses of gamma ray energy that have been observed in distant galaxies. Two types of gamma ray bursts have been observed (to date anyway): long-period gamma ray bursts last for seconds to minutes and seem to be associated with supernova events; short period bursts last for milliseconds and may represent a cataclysmic outpouring of energy from colliding neutron stars. Similar to the polar emissions from a neutron star, seen as a pulsar if the observer is within the cone traced out by the polar streams, gamma ray emissions from a GRB are very directional as well as intense. If a GRB went off anywhere within our galaxy, yes the entire galaxy, and Earth was in line with one of the two polar beams, all life on Earth would be extinct within hours. In his book "Death from the Skies," fellow Discover blogger Phil Plait has a great description of what life on Earth would be like in its last minutes, and my co-author Ges Seger and I examined this phenomena in this short story. Now before you lie awake at night worrying, here's a podcast describing why we should be safe from GRBs. GRBs were first discovered in 1967 by the Cold-War-era Vela satellites--satellites designed to detect the gamma ray pulses emitted by nuclear weapons tests. When the Velas began sensing gamma ray pulses that weren't coming from Earth, the initial reaction was that those darned Rooskies were testing nukes beyond the moon. Cooler heads prevailed, and GRBs were observed to be occurring isotropically--or equally likely in any direction. Numerous hypotheses were advanced to explain them before science settled on the current models. Some of these hypotheses are less mainstream, but more fun, than others. One of my favorite "must read" online columns is Gregg Easterbrook's "Tuesday Morning Quarterback" on ESPN. TMQ is a nerd-friendly analysis of the past week in the NFL, sprinkled with asides on politics, science, and science fiction. Mr. Easterbrook maintains that GRBs may, in fact be muzzle flashes from distant alien doomsday weapons:

Recently, astronomers glimpsed the most distant gamma-ray burst ever observed--so far away it may have occurred only about a billion years after the universe formed. If gamma-ray bursts are caused by dying super-massive stars, as some cosmologists think, this is the oldest (or youngest, from the perspective of the cosmos) such death so far observed. But as TMQ cautions about gamma-ray bursts, don't assume they must be natural. Maybe they are the muzzle flashes of doomsday weapons. Maybe what GRB 080913 tells us is that shockingly soon after life began, so did the horror of combat.

This is a fun notion to mull over, but unlikely nevertheless. It's inconceivable that any civilization could generate artificially the colossal energies associated with GRBs. Moreover, if GRBs were, in fact, telltale signs of distant alien warfare, astronomers would observe energy bursts anisotropically, or coming from a preferred direction in space... ...which is exactly what has been happening recently. In Antarctica, the IceCube Neutrino Observatory is designed to detect the ever-elusive neutrino--subatomic particles emitted from cataclysmic astrophysical phenomena like supernovae and GRBs. Although, for this experiment, they are considered "noise", IceCube can also detect cosmic rays. Not only has IceCube been detecting an over-abundance of cosmic rays, lately, they have been observed anisotropically--coming from a preferred direction. Now THAT is the kind of observation that would hint at being muzzle flashes from distant alien warfare. Realistically, the IceCube observations are certainly naturally occurring, and it's only a matter of time until astronomers identify a source. The observations do raise an interesting point, though. Current SETI research is based largely upon the notion that the first signals we detect from an alien civilization will be radio signals--from an intentional attempt at contact or a byproduct of their internal communications like our radio and television. Weaponry almost certainly would emit far more detectable energy into space, though it may be more narrowly focused. If we do detect alien intelligence, it may be more likely due to a BANG, not a whisper. Wouldn't it be wonderfully ironic if the Vela satellites, designed to detect nuclear tests, discovered GRBs, and a detector like IceCube, designed to detect neutrinos from astrophysical events, initiated First Contact? 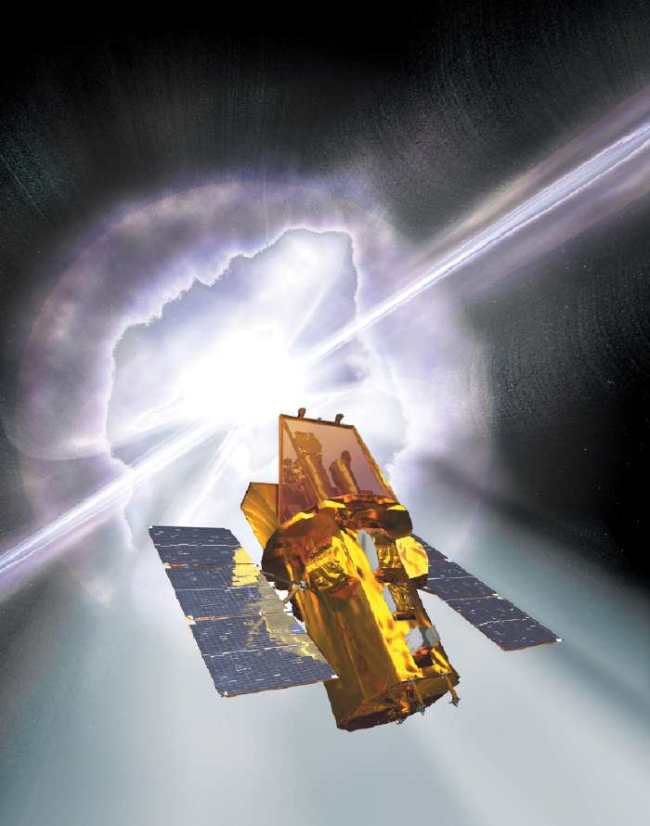