Contemplating the Skeletal Self 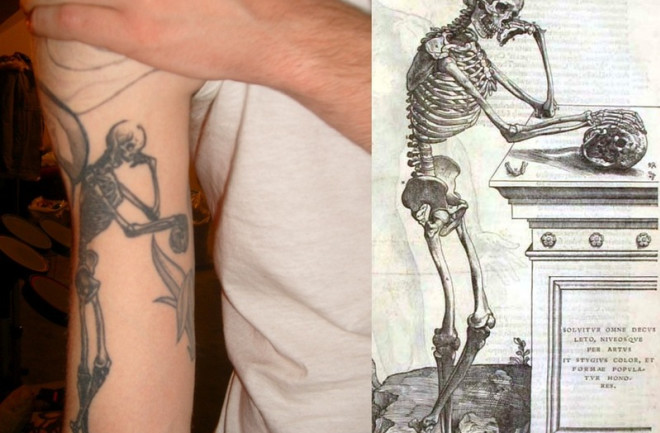 "Original art by Vesalius, the founder of modern anatomy. Taken from Carl Sagan's The Dragons of Eden. As student of social science, I find the concept of man studying himself awesome."

Carl: A skeleton gazes at a skull, its hand draped lazily over the cranial vault. This image signifies more than just an anatomy lesson. Andreas Vesalius, the anatomist who drew it and many others, created a visual fault line that divided the ancient and the modern. Medieval European anatomists looked back to ancient authorities such as Galen for enlightenment. Anything they saw for themselves that did not seem to fit into the ancient systems must be their own errors, to be resolved by more careful reading of the Greeks and Romans. After all, God had given Adam perfect knowledge of nature, and human understanding had declined ever since his fall. Galen and the other classical writers were closer to creation, and thus further uphill on the downward slope of knowing.

Galen certainly was a brilliant anatomist, but his limitations were forgotten during the Dark Ages. He never even dissected a human cadaver, for example, contenting himself with pigs and other animals. It was not until the sixteenth century that someone noticed these shortcomings for what they were. Vesalius created an original anatomical guide, filled with drawings of his own, made from his own observations. He also helped spur a new approach to the human body (and the bodies of other animals): to challenge old beliefs and to learn with one's own eyes.

Some may see this image as a morbid reminder of death, a skinned "Alas poor Yorick." But I see it more as an embodiment of science, of one skull (and its resident brain) learning from another.