Why people are certain they remember things that never happened. 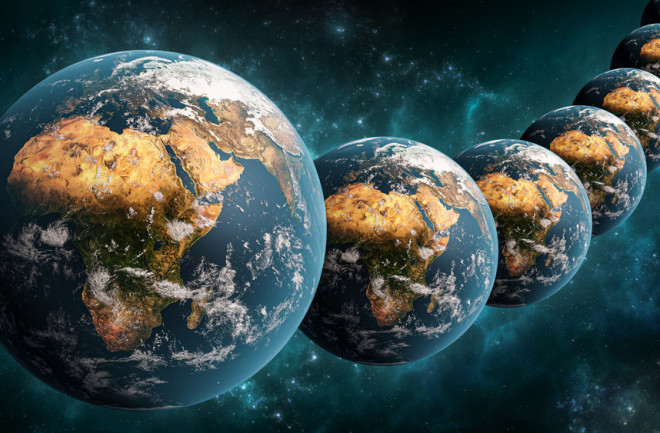 Would you trust a memory that felt as real as all your other memories, and if other people confirmed that they remembered it too? What if the memory turned out to be false? This scenario was named the ‘Mandela effect’ by the self-described ‘paranormal consultant’ Fiona Broome after she discovered that other people shared her (false) memory of the South African civil rights leader Nelson Mandela dying in prison in the 1980s.

Is a shared false memory really due to a so-called ‘glitch in the matrix’, or is there some other explanation for what’s happening? Broome attributes the disparity to the many-worlds or ‘multiverse’ interpretation of quantum mechanics.

When not directly observed, electrons and other subatomic particles diffract like waves, only to behave like particles when a measurement is made. Essentially, it’s as if these particles exist in multiple places simultaneously until directly observed. The Nobel Prize-winning physicist Erwin Schrödinger explained this strange concept with the ‘Schrödinger’s cat’ thought experiment in 1935. If a cat were placed in a box with a radioactive-decay-detector rigged to break a flask of poison when activated, a decaying particle existing as a wave would yield two simultaneous macroscale realities — one where the cat is alive and one where the cat is dead. Although, upon observation, one could see that the cat is either dead or alive, some quantum physicists such as the late Hugh Everett III — who first proposed the many-worlds interpretation in 1957 — have speculated that both realities exist … but in separate, parallel universes.

It’s important to keep in mind that the many-worlds interpretation was developed to explain the results of physics experiments and not the Mandela effect. Nonetheless, Broome believes that her shared memory isn’t actually false, and that she and others who remember a different past were actually in a parallel reality with a different timeline that somehow got crossed with our current one.

More recently, people on Reddit and other websites have identified further instances of the Mandela effect, including shared memories that the children’s book series ‘The Berenstain Bears’ used to be spelled ‘Berenstein Bears’ and that there was a movie called Shazaam in the 1990s starring the US comedian Sinbad.

Regardless of what really happened, there’s no denying that shared false memories exist. Can neuroscience provide an alternative hypothesis for what’s really going on, without evoking quantum physics? There are several concepts that might explain something so strange. First, it’s important to remember that a memory is made up of a network of neurons in the brain that store the memory. The physical location of a memory in the brain is often called an ‘engram’ or ‘memory trace’. During consolidation, the memory trace is transferred from temporary sites such as the hippocampus to permanent storage sites in the prefrontal cortex.

Prior learning creates a framework for similar memories to be stored in close proximity to each other. This framework is known as a ‘schema’. One bit of evidence for this comes from a 2016 study on human semantic memory — long-term memories of ideas and concepts devoid of personal detail. To parse the terrain, researchers used functional magnetic resonance imaging (fMRI) to show that similar words are stored in adjacent regions of the brain, and even created a ‘semantic map’ of language in the human cortex. Another recent study confirmed that shared memory traces are organised in similar ways from one individual to the next.

Although we might think of memories as being strengthened when recalled, the truth is actually more complex. Recalling a memory reactivates the neurons composing the memory trace, spurring them to form new connections. The altered circuitry then becomes stable again, and the memory is ‘reconsolidated’.

Reconsolidation can reinforce learning over time by strengthening neural connections and allowing the formation of new associations.

But obviously, taking a memory trace apart and putting it back together again makes that memory vulnerable to losing its fidelity. Here’s an example: at some point in their education, most Americans learn that Alexander Hamilton was a founding father but not a US president. However, when a study on false memory investigated whom most Americans identify as US presidents, the subjects were more likely to incorrectly select Hamilton but not several actual former presidents. This is likely to be because neurons encoding information about Hamilton were frequently activated at the same time as neurons encoding information about former presidents. Because neurons that ‘fire together wire together’, a connection between past presidents and Hamilton could gradually become strong enough that you would incorrectly remember Hamilton as a former president himself.

The Hamilton study could also help to explain why groups of people share false memories, as with the mystery of Shazaam. First, there was a children’s movie called Kazaam (1996) starring Shaquille O’Neal as a genie. Then, some people falsely remember another 1990s film, perhaps a rip-off of Kazaam, called Shazaam, starring the comedian Sinbad as a genie. Although Shazaam never existed, there are hundreds of people online who claim to remember it.

There are several reasons for this. First, a large number of general associations increase the probability that a false memory could emerge. Twin films with similar concepts being released at around the same time were common in the 1990s. Sinbad had a different movie out that same year called First Kid, which — like Kazaam — involves the hero coming to the aid of a wayward boy. And Sinbad had also previously released Houseguest (1995), the poster for which has an image of his head coming out of a mailbox, perhaps abstractly resembling a genie emerging from a lamp. Sinbad is an Arabic name, and the story of Sinbad the Sailor is often associated with encounters with genies. Sinbad’s bald head and goatee resemble a typical genie portrayed in the media. Sinbad also dressed up like a genie for a movie marathon he hosted in the 1990s, which almost certainly contributed to the ‘memory’ of Sinbad playing a genie. Besides similar associations laying the groundwork for a false memory to form, the other main factors in this instance are confabulation and suggestibility.

The Redditor EpicJourneyMan recounts an extremely detailed account of Shazaam from when he was working in a video store in the 1990s. In his post, he describes buying two copies of the movie and having to watch each several times to verify that it was damaged after renters complained. He then proceeds to describe the movie plot in great detail.

If Shazaam never existed, how does he have such a detailed memory of the movie? This is most likely an instance of confabulation, or the brain’s attempt to fill in missing memory gaps by adding fabricated facts and experiences. Unlike lying, confabulation is not intended to deceive, and the person confabulating fully believes that the ‘remembered’ details are real. Confabulation is associated with a wide array of neurological disorders, including stroke, brain injury, Alzheimer’s, Korsakoff syndrome, epilepsy and schizophrenia, but it can also happen in healthy subjects (as anyone with a memory of ‘President Hamilton’ can attest). Instances of confabulation in healthy people increase with age and are thought to be due to age-related changes to the medial temporal lobe, including the hippocampus, and the prefrontal cortex. These brain regions are important for memory encoding and retrieval, and fMRI studies over the past decade suggest that decreased functioning in these regions underlies false memory.

Confabulation seems to be more frequent in the face of repeatedly unpacking a memory; in other words, someone like EpicJourneyMan, who regularly ordered children’s videos and watched them to find damaged tape, is more likely to confabulate a specific memory from that material.

A third force driving the Mandela effect is suggestibility, the tendency to believe what others suggest to be true. When misinformation is introduced, it can actually compromise the fidelity of an existing memory. This is exactly why in a court of law an attorney can object to ‘leading questions’ that suggest a specific answer. In short, the leading question: ‘Do you remember the 1990s film Shazaam that starred Sinbad as a genie?’ not only suggests that such a film actually exists, but could even insert a false memory of having viewed it.

Although it might be tempting to believe that the Mandela effect is evidence that parallel realities exist or that our universe is a glitchy simulation, a true scientist must test his or her alternative hypothesis by trying to disprove it. In light of known cognitive phenomena that can give rise to shared false memories, it’s highly unlikely that some of us are actually from an alternative universe crossing timelines with the present one. Nonetheless, the Mandela effect is still a fascinating case study in the quirks of human memory. For those who love thinking about how the mind works, it is perhaps even an example of the truth being stranger than fiction.