CNS Response are a California-based company who offer a high-tech new approach to the personalized treatment of depression: "referenced EEG" (rEEG).

This is not to be confused with qEEG, which I have written about previously. What is rEEG? It involves taking an EEG recording of resting brain activity and sending it - along with a cheque, naturally - to CNS Response, who compare it to their database of over 1,800 psychiatric patients who likewise had EEGs taken before they started on various drugs. They look to see which drugs worked best in people with an EEG profile similar to yours, and give you a fancy report with their recommendations.

That's not completely implausible. It could work. Does it? CNS Response and some academic collaborators have just published a paper saying yes: The use of referenced-EEG (rEEG) in assisting medication selection for the treatment of depression. How solid is it? Well, it would be wrong to say that there are many problems with this study. But then if you run off a cliff and plummet into a volcano, you've only made one mistake.

Depressed patients were randomized to one of two groups: treatment-as-usual, which generally meant the common antidepressants bupropion, citalopram, or venlafaxine, vs. rEEG-guided personalized drug treatment. The trial was pretty large, with 114 patients randomized, and pretty long, 12 weeks. The patients had failed to respond to at least one antidepressant (mean: 1.5) during the current episode, so they were slightly "treatment-resistant", though not extremely so.

What happened? The rEEG-guided group did better on the QIDS16SR self-report scale, and on most other measures. Not enormously: take a look at the graph, notice that the vertical axis doesn't start at zero. But better.

Great, they did better. But why? The problem with this study is that the rEEG-guided group got a very different set of drugs to the control group. No less than 55% of them got stimulants, either methylphenidate (Ritalin) and dexamphetamine (speed). These drugs make you feel good. That's why they're illegal, that's why people pay good money for them on the street.

It's debatable whether stimulants are clinically useful as antidepressants in the long term, but they've got a good chance of making you feel nice for a few weeks, and make you say you feel better on a rating scale. Plus there's nothing like a pep pill to drive active placebo effects.

The authors say that "Almost all of the studies with depression not associated with medical disorders have reported minimal or no antidepressant effect of stimulants", and refer to some 1980s studies - yet their own trial has just shown that they do work in more than 50% of patients, and the latest Cochrane meta-analysis finds stimulants do work in the short term... 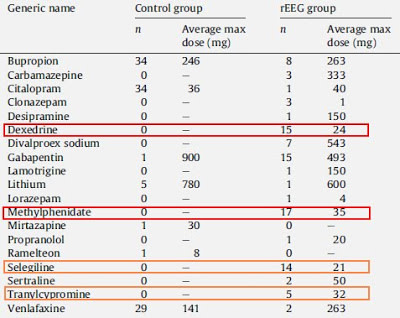 The other big names in the EEG group were MAOis (selegiline or tranylcypromine). These are often effective in treatment-resistant depression. Not necessarily more so than other drugs, but remember that these patients had already failed at least one SSRI(*). Yet the control group were, it seems, almost all given SSRIs - either citalopram, or venlafaxine, which is effectively an SSRI at low doses, e.g. the average dose used here, 141 mg. (It does other stuff, but only at higher doses of 225 mg or 300 mg.)

In summary, there were two groups in this trial and they got entirely different sets of drugs. One group also got rEEG-based treatment personalization. That group did better, but that might have nothing to do with the rEEG: they might have done equally well if they'd just been assigned to stimulants or MAOis etc. by flipping a coin. We cannot tell, from these data, whether rEEG offered any benefits at all.

What's curious is that it would have been very simple to avoid this issue. Just give everyone rEEG, but shuffle the assignments in the control group, so that everyone was guided by someone else's EEG. So you'd give control Patient 2 the drugs that Patient 1 should have got, and vice versa; swap 3 and 4, 5 and 6, etc.

This would be a genuinely controlled test of the personalized rEEG system, because both groups would get the same kinds of drugs. It would have been a lot easier too. For one thing it wouldn't require the additional step of deciding what drugs to give the control group. The authors decided to follow the STAR*D treatment protocol in this study, which is not unreasonable, but that must have been a bit of a hard decision.

Second, it would allow the trial to be double-blind: in this study the investigators knew which group people were in, because it was obvious from the drug choice. Thirdly, it wouldn't have meant they had to exclude people whose rEEG recommended they get the same treatment that they would have got in the control group... and so on.

Hmm. Mysterious. Anyway, we may be hearing more about CNS Response soon, so watch this space.

(*) - Technically, some of them had failed an SSRI and some had failed "2 or more classes of antidepressants", but one of those classes will almost certainly have been an SSRI, because they're the first-line treatment.