City of Ember: Keeping a Society Bottled Up 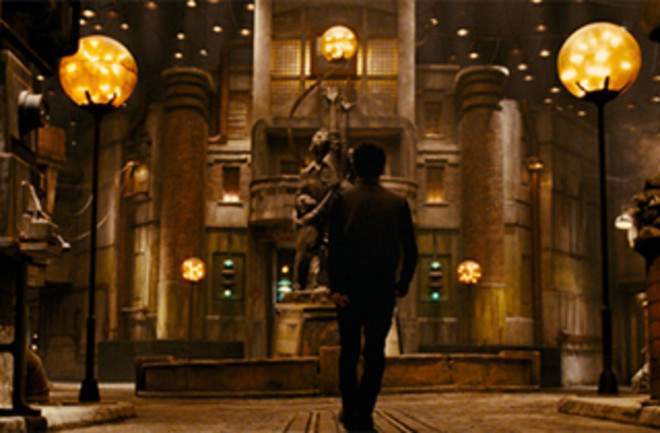 City of Ember opened on Friday, a beautifully visualized adaption of the book of (almost) the same name. The eponymous city is actually the ultimate bunker, a settlement located in a vast underground cavern and designed to sustain a community for 200 years following the apocalypse. Unfortunately, more than 200 years have passed and the systems that sustain the city are beginning to break down, most notably the giant generator that is the sole source of electricity. This is a particular problem as the inhabitants are sealed in, with no memory of any existence beyond the boundaries of the city. The exit instructions eventually fall into the hands of two youngsters who must battle social inertia and a corrupt mayor to escape the coming darkness. The ignorance of the population is actually the result of a deliberate decision by the city's builders. In order to keep the population tucked safely away for 200 years, the builders decided to remove the temptation of the surface world by excluding any record of its existence--and to make sure curious inhabitants stay within the cavern, technologies such as batteries and candles are excluded as well, literally tethering would-be explorers to a power outlet. In this City of Ember is exploring a problem that science-fiction writers have wrestled with for decades, and which real-life space agencies have realized they must also address. In a nutshell, the problem is that the type of people who build cities, or want to fly spaceships, are not the best suited to sitting around doing nothing. In science fiction, as with City of Ember, this often crops up on the level of entire societies: how do you keep a closed society from either outgrowing the capacity of the systems that sustain it, or maintain good mental health among those generations who are doomed to being just a link in a chain not of their own making? Harry Harrison's 1969 book, Captive Universe, is probably the classic of this genre, set onboard a so-called Generation Ship (a spaceship that takes centuries to cross between stars, with several generations of passengers living and dying before it reaches its destination). For a modern twist, check out Greg's Egan's recent Incandescence, about a civilization that must eke out an existence within the confines of a planetoid orbiting close to a neutron star. Space agencies haven't got to point of worrying about Generation Ships, but they are getting worried about the psychological health of the crews that will one day explore Mars. Unless radical and unexpected improvements in propulsion technology happen, people who explore Mars will have to endure a many-month-long voyage from Earth (and an equally long return journey). The problem is that a crew composed of the hard-charging, driven, and competitive Type-A personalities that dominate today's astronaut corps may not do well once cooped up onboard a spaceship for a few months--a more mellow personality may ultimately be more successful. As a result, space agencies and private organizations like the Mars Society are conducting simulations to find out what happens to people sealed up together in a few rooms for long periods of time, and what mix of personalities is most likely to prevent murder or mutiny in outer space.