Citizen Powered Neuroscience with Project EyeWire - Using Your Neurons to Map the Brain! 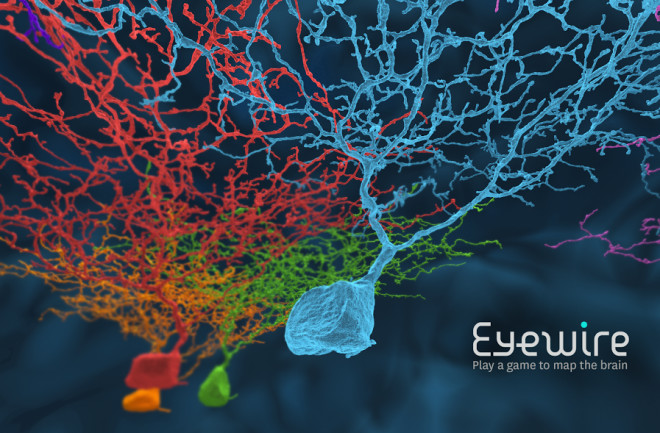 EyeWire: Citizen powered neuroscience to map the retinal connectome I'm an information junkie. Talking about science, technology and design excite me. My idea of funny? Wry, with lots of puns. I’m a romantic at heart and I love jazz. And as you might guess from the fact that I’m writing this article, I’m a citizen science enthusiast. If you’re wondering about how different from (or similar to) me you are, then it’s probably because of the way the neurons in your brain connect to each other. That’s what Sebastian Seung, a professor of Computational Neuroscience at MIT believes. In his now famous 2010 TED talk, Seung argued that it’s the distinctive way that the neurons in your brain are connected, your ‘connectome’ as it is referred to that makes you unique. To see if this were indeed true, Seung did what any scientist would. He set about testing the hypothesis. But the human brain has about 100 billion neurons and an estimated 100 trillion connections. Indeed, understanding how the brain works and what happens in a diseased brain is one of the big questions that has eluded the human race. Scientists are tackling this problem in many ways and Seung’s attempt to map the connectome is one of them. Back in Seung’s lab at MIT, he and his team began to create the map of retinal neurons (the retinal connectome) by applying artificial intelligence (AI) algorithms to images obtained with an electron microscope. He soon realized that they would need something more than just brute computational force to tackle this challenge.As it turns out the algorithms needed a little human help to make accurate three dimensional maps. Why people? Why not create more algorithms that can power through this stuff? The answer fittingly, lies in the extraordinary capacity of the human brain to do things like recognize patterns and understand how pieces in a 2D image slice connect to form a three dimensional object. So armed with all this raw image data and AI, Seung’s team created EyeWire, a game that would crowdsource the intelligence of amateur citizen neuroscientists to map the human brain. To start with, they designed the game to analyze the neuronal wiring of the retina. This would help them understand how vision works, a small step in the larger context of the connectome.

Retinal neurons that EyeWire is creating a map of (Image credit: Jamie Simon, Salk Institute for Biological Studies.) Less than a year and half later, EyeWire boasts of an impressive list of accomplishments. Over 120,000 players from 150 countries have participated in Eyewire, reconstructing more than 100 neurons. The EyeWire project won several awards and has been displayed at national events including TED conferences and the US Science and Engineering Expo in 2014. EyeWire also ranked at the top of the most visited citizen science projects in the Scistarter database for 2013. In a testament to the power of crowdsourced citizen science to take on complex challenges and achieve results, the group was able to use the efforts of citizen neuroscientists in EyeWire to solve a piece of the long standing vision puzzle. Their results were considered so significant in the field of neuroscience that they were also able to publish the results in Nature, one of the most selective peer-reviewed scientific journals in the world (Heads up - Full article behind a paywall). Alright, so let’s cut to the chase. What’s EyeWire all about and how do you play it? In short, it’s about looking at patterns and filling in the missing pieces to reconstruct neurons in 3D. You, the ‘EyeWirer’ are presented with a screen that’s split into two sections. On the left you are shown a cube in with a partially reconstructed neuron is visible in 3D. On the right is a series of 2D electron microscopy images that are essentially ‘slices’ of the 3D cube. As you scroll through the slices you begin to identify areas that the algorithm has missed out in the reconstruction. You can quickly fill in these missing pieces with the click of a mouse, and this adds to the 3D neuron on your left. The fun begins when things begin to get trickier. Because as the neurons bend, weave and branch out it’s not always easy to trace the pieces. This is also when the algorithm tends to have more missing parts, requiring your keen powers of observation. Getting started by creating a login is pretty straightforward and it takes less than a minute signup using your email. The best part about starting to play Eyewire is the fact that you don’t get thrown in to the deep end right away. The game guides you through a series of tutorials that will train you not only to use the controls but also help you understand how the 2D image and the 3D cube match up, an important part of playing the game effectively. When you are in training mode, a progress bar appears that notifies you of how much of the cube you have completed. If you make a mistake when you are training, the piece is colored differently and the progress bar also indicates in red that you’ve made an error. You can then undo that step with a simple right click of the mouse.

Screenshot of my EyeWire training. The parts traced by the AI software is in blue, the areas that I traced correctly are in green and the pieces that I missed out are in purple. Incorrectly traced pieces would’ve appeared in red. A chat window appears on the bottom left. Image credit Eyewire.org You’ve ‘solved’ a cube when you complete the trace in a cube. The same cube is presented to 3 to 5 other players and the algorithm determines the final structure based on the most common path traced by the EyeWirers who solved that cube. The game motivates players to get better, rewarding them using a points system that takes into account the number of missing pieces added and accuracy, among other things. Players try to move up the scoreboard by solving as many cubes as possible. To give you a sense of how much effort this project would take, to map out a neuron completely would require a few thousand cubes to be solved. So the more number of players, the faster the project progresses! If you get really good at tracing neurons, you will get promoted to a ‘Scout’ or a ‘Scythe’. Scouts and Scythes are advanced players who can inspect and correct cubes that others have solved. In essence they function as moderators of the EyeWire community. You’ll never have to worry about forgetting something about the game or getting stuck with a technical problem while playing. EyeWire has an incredibly helpful set of instructions, videos and FAQs to help you out. Beyond all that, there is also a very active community at the EyeWire forum who are quick to respond to any question that you may have! By introducing office hours in April 2014, the EyeWire team has taken great pains to ensure that anybody who needs help, gets it. The office hours are bound to be very helpful to both newcomers and seasoned EyeWirers who are looking to move to the top of the points leaderboard. In creating EyeWire, Seung and his team have showcased the limitless potential of citizen scientists. What amazes me is that this is just the beginning. I can’t wait to see the incredible discoveries that citizen neuroscientists are going to make using EyeWire. So if you’re reading this and you’re not on EyeWire yet, I recommend that you jump on to this bandwagon in a hurry. Because it is going to go places!

Are you ready to fire up your neurons for citizen neuroscience? Visit the project site to get started. Or if you’d like to become part of the Scistarter community to learn about other great projects you can start here on the EyeWire Scistarter project page!